A new cook is in the Kitchen of Women Living Well and I can’t be more excited!!! Not only is Janelle the new cook for Tasty Tuesdays but she is also the newest addition to my personal Good Morning Girls group (Becky in the middle is also a new addition to my personal GMG group)! Woohoo! Janelle has popped up a few times on Women Living Well. Once she brought an amazing Pineapple Pretzel Fluff to my house and I immediately took pics and posted it. And about a year previous to that Janelle ran my first 5K with me! […]

END_OF_DOCUMENT_TOKEN_TO_BE_REPLACED

Two years ago Forbes magazine dubbed my hometown among one of “America’s Fastest-Dying Cities”(many of our steel mills have closed leaving people jobless). This year we ranked 9th among the magazine’s “Most Miserable Cities” in America. Our closest city to the north is Cleveland, Ohio who was voted NUMBER ONE as the most miserable city! This is not a list you want to be ranked on! How did we get to 9th place? The newspaper says, crummy weather, high unemployment, high rates of violence and crime, problems within the education systems, corruption with public officials and poor sports teams (while […]

END_OF_DOCUMENT_TOKEN_TO_BE_REPLACED

I woke to a new beginning. The age 34 is behind me and today I’m 35! A lot happened in my life last year – I began my first year of homeschooling and LOVED it! We moved to a new home. The blog grew with the Rachael Ray appearance. The Good Morning Girls groups began on-line and grew to over 600 ladies this past summer! My husband began a new business. We lost two loved ones to death. We made many wonderful memories as a family and have grown spiritually. I grew as a wife, mom and friend. It was […]

END_OF_DOCUMENT_TOKEN_TO_BE_REPLACED

Monday we began our first day of school. So, the traditions began. At bedtime, the family gathered in the upstairs hall and we went around the circle praying out loud for the new school year. It was so precious I wish I had video taped it! Then once the kids were asleep, I set up stuffed animals in both of their bedrooms with books in their hands. So they woke to their playmates already deep into their studies! Then they came to the kitchen to find that it was “Daddy Donut Day”. Periodically, daddy surprises the kids and announces that […]

END_OF_DOCUMENT_TOKEN_TO_BE_REPLACED

Let me be honest, I LOVE writing here at Women Living Well. I LOVE my readers so much and pray for you all often. I enjoy opening the doors to my home and saying – this is what I am learning in the areas of my marriage, parenting and homemaking. But at the end of the day, if I didn’t have my walk with the King, if I wasn’t daily in God’s word and praying… my marriage, parenting and homemaking would crumble. The only thing that sustains me daily is God’s word. I am utterly and completely dependent on God […]

END_OF_DOCUMENT_TOKEN_TO_BE_REPLACED

I numbered the linky entries as 1-38 and then the comments to follow as 39+. Random.org says Melissa at Kaufman’s Cottage is our winner!!!! Congratulations!!! Please send me your home address and I will be sure to have the $50 gift certificate sent to you!!! Thank you to everyone who participated in the summer challenge. You held me accountable in my own life and have helped me work on my own marriage! Thank you! Walk with the King!

END_OF_DOCUMENT_TOKEN_TO_BE_REPLACED

Let me just be honest, I love a schedule. I’m not sure if there’s ever been a day that I have perfectly stuck to it. But I have found that creating routines and a rhythm in the home creates peace. It also helps me to keep my priorities a priority and accomplish everything that needs to be accomplished in the day. I have been practicing this schedule recently and tweaking it and I am sure it may get a few more tweaks by the end of September but here is an idea of what our days will look like this […]

END_OF_DOCUMENT_TOKEN_TO_BE_REPLACED

As the new school year begins, journaling with your children is a fun way to capture memories while communicating with your children. One of the girls in my “Good Morning Girls” group (Melanie) sent me photos of the journaling she has begun with her daughter. First she got a simple notebook and they keep it on her daughters bed. Below you can see one of their entries. Melanie wrote a little note to her daughter. She told her how she loved her, some plans for the next day and apologized for a disagreement they had earlier in the day. Her […]

END_OF_DOCUMENT_TOKEN_TO_BE_REPLACED

For Mother’s Day my mother bought me a new waffle maker. Yep, you heard me right – my mother bought ME a Mother’s Day gift!!! She’s so generous! So here is my recipe for delicious Homemade Waffles! Ingredients: 2 cups flour 2 tbsp sugar 4tsp baking powder t tsp salt Mix together. In a separate bowl whisk these together: 1 tsp vanilla 2 eggs 1 1/2 cups milk 1/2 cup oil Add these to the dry ingredients. Cook your waffles according to the waffle maker instructions and Enjoy!!! Walk with the King! I am participating in Tempt Your Tummy Tuesday, […]

END_OF_DOCUMENT_TOKEN_TO_BE_REPLACED

Are you ready for school to start? It’s time to get organized! If you Follow Me On Facebook, then you know that I have been working on a new school schedule. It starts with me rising at 5am – ugh! But it seems to be the only way to get it all done. I will post my schedule after I’ve lived it and tweaked it a bit. But today I want to share some organizational tips from a friend I’ve known since high school (pictured on the right is Erin and her lovely family!). I want to invite other bloggers […]

END_OF_DOCUMENT_TOKEN_TO_BE_REPLACED

Yesterday I was a Hostess over at the Heart Of The Matter Online’s Homeschooling Conference. I opened for Sally Clarkson (who will be a fellow speaker at the Relevant Conference in October – I am DYING to meet her!!) and I led a chat session after her session. If you missed it – here’s the Cliffs Notes version!!! First let me briefly fill you in on who Sally is. She is the homeschooling mother of 4 children – 3 are grown. She has multiple books published on Motherhood and she is a blog writer (I Take Joy) and a conference […]

END_OF_DOCUMENT_TOKEN_TO_BE_REPLACED

Nothing says summertime like this fresh blackberry pie! During the Marriage Challenge, we were to make our husband’s favorite meals and desserts. Fruit pies are on the list of my husband’s favorite desserts (right next to Cheesecake)! Last week my sister had us over and she served this pie made with berries from her own yard (picture below). Since my vegetable garden did not do so well , I’m thinking maybe I should try growing some berries and things next year? We’ll see. Here’s her recipe for Blackberry Pie: Pastry for 9inch two crust pie (she used Aldi’s brand) 1 […]

END_OF_DOCUMENT_TOKEN_TO_BE_REPLACED 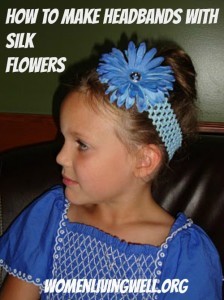 I love these silk flower headbands that my friend Kelly (pictured below) made for Alexis. So when we were on a retreat, I took a photo of her making one! First you buy some silk flowers and plain headbands at Target (they came 5 in a pack for around $3) Then you remove the stem and take the flower apart. Then you hot glue gun any parts of the flower you want kept together. And you add any little extra frills you’d like. She hot glue gunned shiny rhinestones to each one and then glued the flower to the […]

END_OF_DOCUMENT_TOKEN_TO_BE_REPLACED

There are times I receive emails from my dear readers that contain questions far too difficult for me to answer. When the questions are beyond my experience or studies I often say “I’m sorry I am not a counselor. You need to seek out a pastor, trusted Godly friend or call Focus on the Family’s 1-800 number (1-800-232-6459). I deeply regret this is beyond my expertise.” There are moments I feel inept to write on this blog because I am not a counselor – I just don’t know all the answers and I so wish I did!~ Thankfully there is […]

END_OF_DOCUMENT_TOKEN_TO_BE_REPLACED

Deuteronomy 6:7 says to teach our children God’s commands along the way of life. It is important that we train our children to watch what they say. We can save them from a lot of heartache by simply teaching them to think before speaking. (You’ll notice in the video that we had done a “dry run through” so the kids are a bit more “dramatic”and taking the words out of my mouth – so funny! I wish it were a little less scripted but you get the point!) James 3:5,6 says “The tongue is a small part of the body, […]

END_OF_DOCUMENT_TOKEN_TO_BE_REPLACED

This is my FAVORITE Starbucks drink! There can be 10 inches of snow on the ground and I still crave this icy drink! But we all know that these little Starbucks drinks are $4 a pop! So I was DELIGHTED to find that my oldest sister, Kristen, has discovered how to make these at home – bless her heart! This is what older sisters are for right? lol!Last week, while the kids swam at her house – she whipped one up (actually two and she offered me thirds but who’s counting right?) and it was delicious!!! Here’s the recipe: Starbucks […]

END_OF_DOCUMENT_TOKEN_TO_BE_REPLACED

Join us for our Winter Bible Study in 2 Kings!