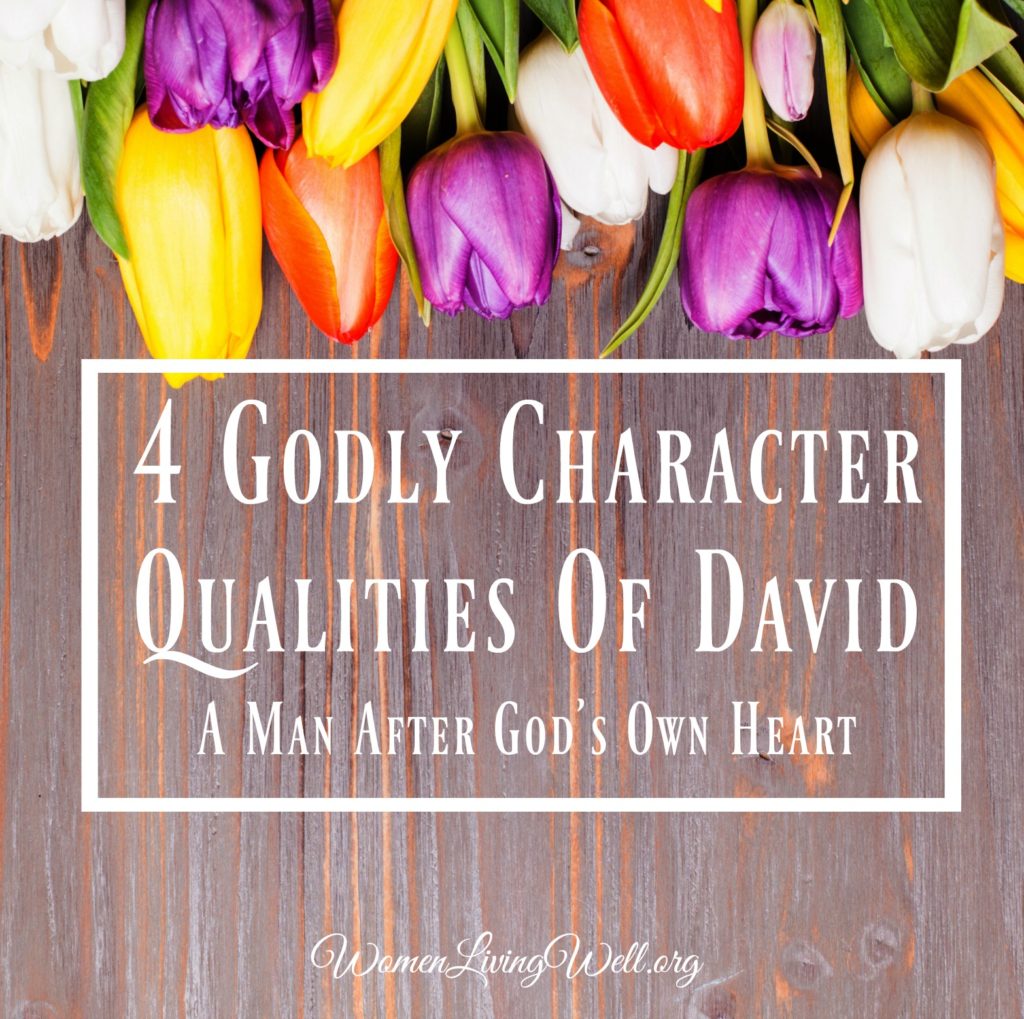 King David is probably most known for defeating the giant Goliath.  His courage and trust in God, as a young shepherd boy, prepared him to be the King of Israel.

In 2 Samuel chapter 9, we see the tender, gentle and compassionate side of this warrior and king.  As we look at the 4 Character Qualities of David – we will see that these qualities are a reflection of the King of Kings – Jesus.

This chapter opens up with David asking if there are any relatives from the house of Saul alive that he can bless.  Remember, that typically, a new king would wipe out the previous king’s family so there would be no threat to his throne.  So this is quite a humble endeavor.

David discovers that indeed – there is a son of Jonathan, who was crippled at the age of 5, still alive.  His name is Mephibosheth.

Now watch as the godly character of David is on display as this story unfolds.  May we learn to be like David…who was like Christ.

1.)  David was kind and his kindness came from the heart of God.

David did not have kindness of his own to show the house of Saul.  Saul had chased David and made his life miserable.  Instead, it was the kindness OF GOD that he wanted to give away.

And the king said, “Is there not still someone of the house of Saul, that I may show the kindness of God to him?” (v. 3)

We too are to be instruments of God’s kindness.

While we were sinners and did not deserve the kindness of God – Jesus died for us.  And so now that we have received His kindness – we can give it away.

Kindness is a fruit of the spirit.  Even when others mistreat us – God will enable us to be kind through His Holy Spirit.

2.) David kept his promise just like Jesus keeps all of his promises to us.

In 1 Samuel 18 and 20, David had promised Jonathan that he would not cut off his love from the house of Saul, once Jonathan was gone.  And so David was a covenant keeping man.

And David said to him, “Do not fear, for I will show you kindness for the sake of your father Jonathan. (v.7)

We need to be women of our word.  When we make a promise, even if it is difficult to keep, we should follow through on our word.  The Bible is filled with God’s promises to us and I am so thankful that God never changes and He always does what he says he will do.  We can trust Jesus because he is a covenant keeping God.

3.) David showed grace just as Jesus has given us grace.

When Mephibosheth arrived before David’s throne, he was scared. He knew that David had the power to put him to death but David removed all of his fears.  He not only gave him life but he promised to restore the land of Saul to him and let him eat at the kings table forever!

And David said to him, “Do not fear, for I will show you kindness for the sake of your father Jonathan, and I will restore to you all the land of Saul your father, and you shall eat at my table always.” (v7)

Oh my – this is a beautiful picture of Jesus’ love for us!  We are the crippled man in this story and Jesus has not only restored us from judgement but he has invited us to eat at his table – as part of the family of God – forever!

Freely we have received – now freely we must give.

We too must generously show grace to others.

David was busy. He didn’t really need another task to do but in the midst of all his important kingly duties…David was thoughtful.  He remembered that he had a responsibility to give. He didn’t just have good intentions.  His love was proactive and he sought Mephibosheth out on his own, the same way Jesus sought us out to seek and to save.

So Mephibosheth ate at David’s table, like one of the king’s sons. (v11)

David had no agenda except love.

The crippled man had nothing to offer yet he was treated like he was part of the family!

God has treated us – not as guests – but as part of his family!

Who does God want you to seek out and help?  Jesus told his disciples to go – make disciples.

People are hurting. They are spiritually crippled and alone with no hope and no abundant life.  They may be afraid to go to God because they fear judgement.  But God can restore people beyond our imagination.  We must be proactive with our love.

And remember as you go, we are daughters of the King of Kings and we share in his bounty.  God wants to feed us daily bread, so don’t go trying to eat somewhere else!  There is a seat at the table for you and he wants to provide for you and nurture you and lovingly lead you.

David was an imperfect man. As we read on in 2 Samuel, we will see him fall into sin.

We too are imperfect and fall into sin on a regular basis.

But King Jesus – He was perfect!  He is the one we follow.

May we become more and more kind, loving and like Jesus.