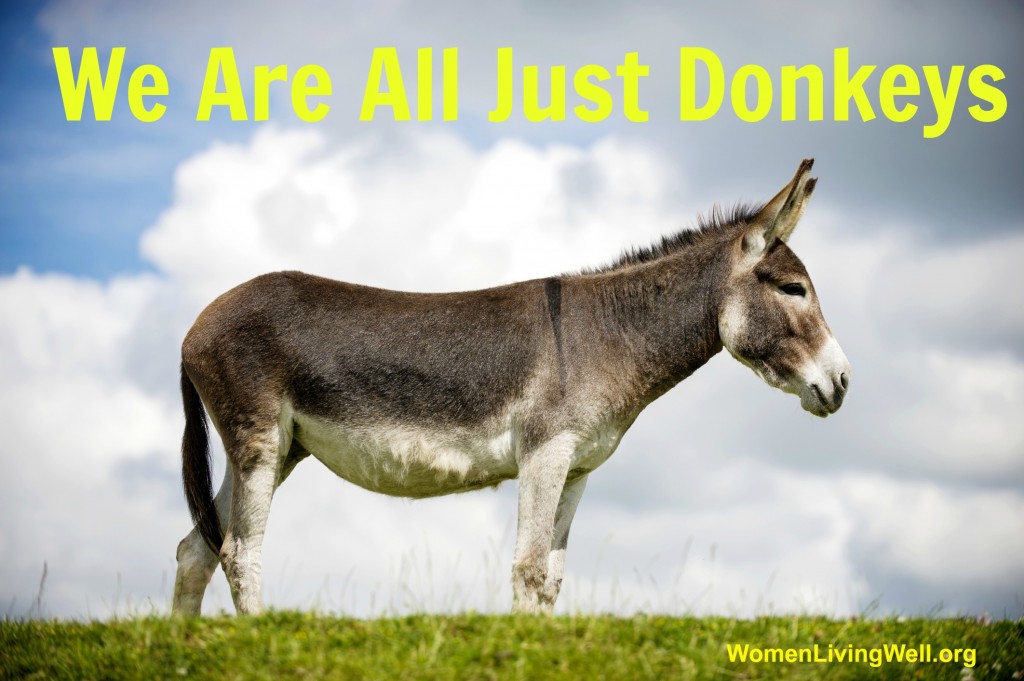 This is not an insult. Just stick with me for a second.

In the blogging world, there’s awards for everything. On the “Circle of Moms”  they crown the Top 25 Blogs in a boatload of categories: couponing, cooking, decorating, party planning, travel, homeschooling, beauty, fashion, vegan, fitness, outdoorsy, single moms, adoption, and more.  You name it, they crown it and yes –they even have a Christian Mom Blog category.

I’ve been in the running a few times for these awards and it’s been awkward for me…I mean – really…should I try to get votes for an award for sharing Jesus on-line? Probably not. It’s awkward…but I have to humbly admit –I’ve participated and accepted the awards.

As I reflected this past Palm Sunday on those who cheered “Hosanna! Hosanna!” as Jesus rode upon a donkey – I remembered something I once heard.

Elizabeth Elliot once said “as the people cheered for Jesus, the donkey did not pause and accept the praise as his own. It was the rider who was being praised – NOT the donkey.”

Matthew 21:9 says, “The crowds that went ahead of Jesus and those that followed shouted,
“Hosanna to the Son of David!” “Blessed is he who comes in the name of the Lord!” “Hosanna in the highest heaven!”
This praise was NOT for the donkey.  In the same way, as I carry Jesus to the world via my blog, facebook, twitter, and youtube, I am reminded that all praise I receive belongs to Jesus. Apart from him I can do nothing. And apart from his word, I literally have nothing worthy to blog about.
We are ALL donkeys carrying Jesus to the world. I pray that at the end of the day it is Jesus people see in you and me.

I Corinthians 3:7 “So, neither he who plants nor he who waters is anything, but only God who makes things grow.”

According to this verse, we are nothing – just simply planters and God is everything and as the missionary David Livingston once said

“People talk of the sacrifice I have made in spending so much of my life in Africa…I never made a sacrifice. We ought not to talk of ‘sacrifice’ when we remember the great sacrifice which He made who left His Father’s Throne on high to give Himself for us.”