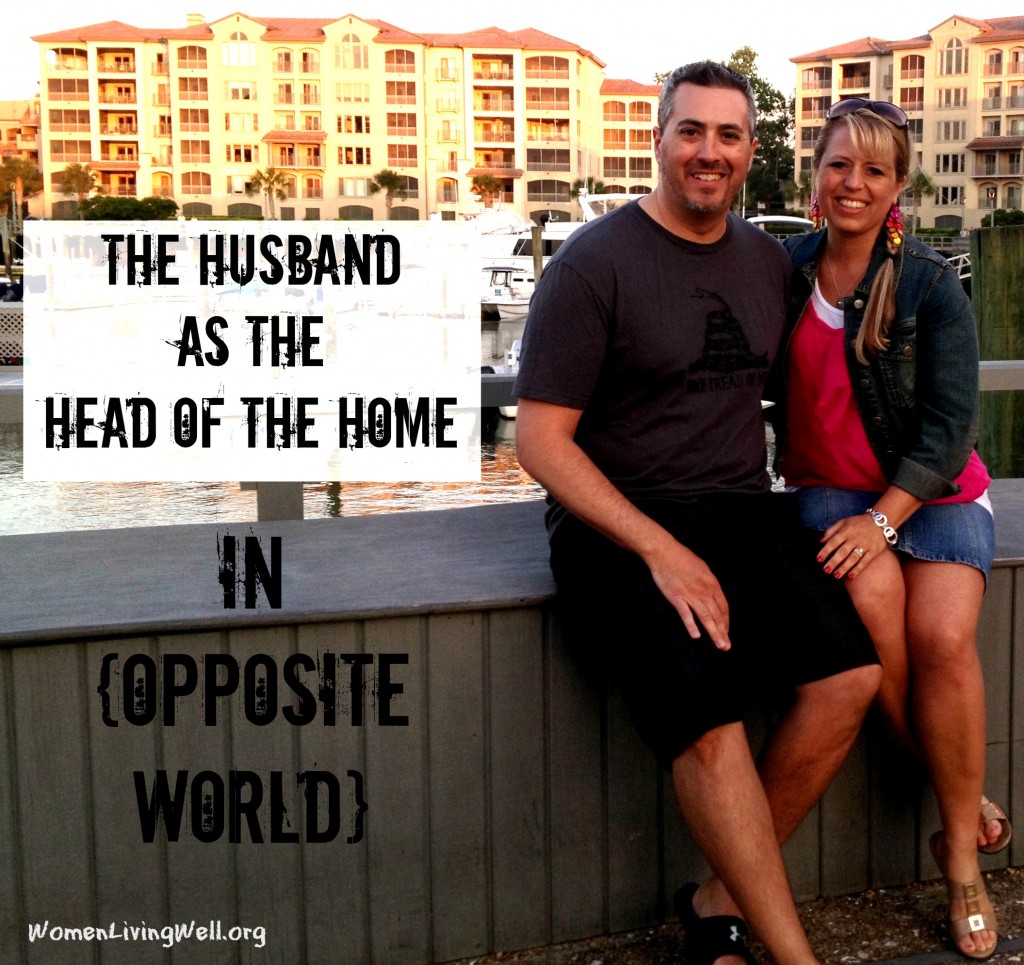 Opposite World leads us only one way –toward 50/50 marriages where no one takes the lead and at the end of the day –the woman calls the shots.

First, let me say that God sees men and women equally.  At the foot of the cross there is neither male nor female.

We are all on equal ground.  We are all sinners, lost and in need of a Savior and His blood sufficiently saves males and females alike.  Neither is more intelligent or more desirable to God.

But in God’s word we see roles given in marriage that makes Opposite World bristle. This thinking has creeped into Christian marriages…and I believe that our marriages lose their ability to shine like lights in a dark world –if we look just like Opposite World.

Most of us are familiar with Ephesians 5:23 where it says:

But some Christians excuse this passage by saying it was only meant for the historical church Paul was writing to.  They make this passage obsolete. Now where do we turn? –to Colossians 3:18 or to Titus 2:3-5.  Those are fine but what did marriage look like in the Old Testament?

I Peter 3 says that the way the holy women of the past made themselves beautiful, was through their submission to their husband.

In the beginning was God.  He created Adam –then the Lord God said “it is not good for the man to be alone.  I will make a helper suitable for him.” And so God created woman from man’s rib and brought her to the man and they became husband and wife.

Now, in Genesis 2:17 before Eve existed, God commanded Adam to not eat of the tree of the knowledge of good and evil.  And then in Genesis 3 –it is Eve who first took the fruit in verse 6 –and ate it.  OH EVE!!! WHY DID YOU DO THAT???

Okay – anyhoo, then she gave the fruit to Adam and he ate it too – stinker!

Now Eve ate the fruit but Romans 5:12 tells us that sin entered the world “through one man and death through sin.”

Wait a minute! Eve sinned first –didn’t sin enter the world through one WO-man?  According to scripture we see Adam – the one who God had given the command, as being held responsible for the sin of he and his wife.  And we see the first picture of headship.

Then there’s the curse in chapter 3 –and God strikes right at the heart of the home for the woman.  God says he will increase her pain in child birth and “Your desire will be for your husband, and he will rule over you.”(Gen.3:16)  Ouch.  This verse means – you will desire to control your husband but you can’t. He will be the dominant one in the relationship.

And right there – marital strife was born.

You wonder why there’s contention in your marriage? Often times it’s because there’s an innate battle for headship happening.  We want our opinions, our rights and our ways to be followed through in the home –and most husbands do not want their wives to rule over them.

So what do we do now?  What a mess right? Why does this have to be so hard?  There’s only one answer…

And here is where Ephesians 5 is VITAL to marriage!!!!  The answer is…

In Ephesians 5, the husbands are commanded to love their wives — like Christ loves the church.

And in this passage, wives are commanded to follow their husband as the head of the home, as the church —follows Christ.

Do you see how vital Ephesians 5 is?  If we make this passage obsolete, we lose Christ!!!

Is your marriage struggling –battling for headship.  You need Christ.

Does Opposite World balk at you for following your husband as the head of your home? Yes, because you are a CHRISTian – a follower of Christ.  And when we follow Christ —our marriages will look different.

This is why I was invited on the Rachael Ray Show (see sidebar for the clip).  I didn’t pursue this show.  They stumbled across my YouTube channel, they contacted me, they listened over the phone to my Biblical thoughts on marriage and they invited me on the show — not because I was someone special –but because there was something different about my marriage.  That something was –>> Christ!  He has made ALL the difference!

Does Opposite World see Christ in your marriage?  Don’t be alarmed by the names Opposite World throws your way –doormat, naive, stupid or airhead.  I’ve had those darts flung at me at least 100 times.   And they are false…the Proverbs 31 woman is a strong, intelligent, confident wife.  Her husband is blessed to have such a valuable wife.  Our role in marriage does not indicate our intelligence or abilities.  It is simply a role God has given to mirror his headship in the church.

The very things that repel some, will draw others to Christ. And so we must press on in our marriages and know that any labels Opposite World gives us is a badge of honor.  It is our honor to serve Christ by allowing our husbands to take the lead.

Chime In: What are your thoughts on your husband’s headship in the home?