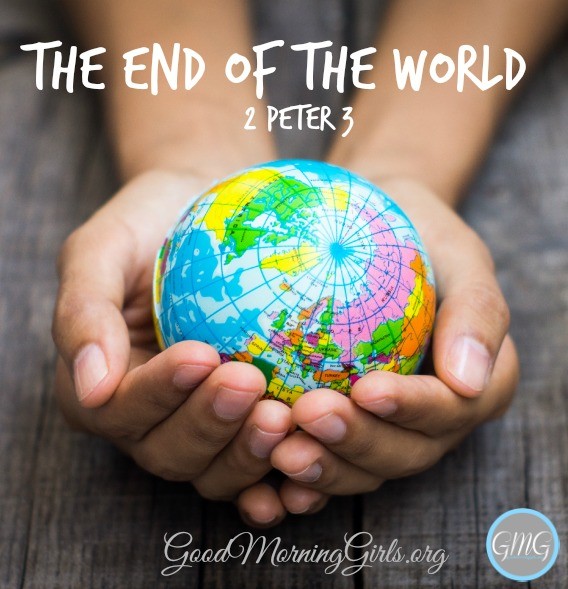 As we “Read Through the Bible”, cover to cover – one chapter a day, we are going to come to passages that typically I would never blog about – but here we are!!!  We are in 2nd Peter chapter 3 and guess what it’s about –the End of the World as we know it!

This is fascinating friends.  So join me as we read about how the world will end.

1 This is now the second letter that I am writing to you, beloved.

In both of them I am stirring up your sincere mind by way of reminder, 2 that you should remember the predictions of the holy prophets and the commandment of the Lord and Savior through your apostles, 3 knowing this first of all, that scoffers will come in the last days with scoffing, following their own sinful desires. 4 They will say, “Where is the promise of his coming? For ever since the fathers fell asleep, all things are continuing as they were from the beginning of creation.”

This chapter begins with the church being mocked because Jesus had not returned yet.  Now remember that Peter is writing to persecuted Christians who have been scattered and running for their lives.  They are already discouraged and now this mockery adds to their mental anguish.

What is Peter’s comfort for those suffering?

A reminder to remember the Old Testament and New Testament scriptures!

When we are down and discouraged we need to always remember to turn to God’s word.  Remember the words of the holy prophets, the apostles and of the Lord!

Note in verse 3 why the mockers mocked.  They were following their own sinful desires.

Consider this, people do not always deny creation and a belief in a holy God because it’s unbelievable but sometimes it’s simply because they don’t want to be held accountable on judgement day for their lifestyle choices.  Perhaps for most people, this is less of an intellectual pursuit and and more of a lust for self-indulgence.  Atheism and evolution are convenient tools for many who don’t want to give up their sinful desires.

5 For they deliberately overlook this fact, that the heavens existed long ago, and the earth was formed out of water and through water by the word of God, 6 and that by means of these the world that then existed was deluged with water and perished. 7 But by the same word the heavens and earth that now exist are stored up for fire, being kept until the day of judgment and destruction of the ungodly.

This passage tells us the world begins and ends with God!

Actually, it goes one step further and it tells us that the world began and will end by the “word of God”.  He spoke it into existence and he’ll speak it out of existence!

Now look at verse 5 where it says that the earth was formed out of water and then in verse 6 it was deluged with water and perished.  This reference is to the days of Noah.  Remember the rainbow when Noah left the ark?  That rainbow was a promise that God would never flood and destroy the earth with water again.

So according to verse 7, what will God use to destroy the earth this time?

Water and fire – two necessary elements for survival – also used for destruction. The earth is covered in water with waters above as well. The earth’s core is fire, along with stars – fire balls in the sky – as well.

8 But do not overlook this one fact, beloved, that with the Lord one day is as a thousand years, and a thousand years as one day. 9 The Lord is not slow to fulfill his promise as some count slowness, but is patient toward you, not wishing that any should perish, but that all should reach repentance. 10 But the day of the Lord will come like a thief, and then the heavens will pass away with a roar, and the heavenly bodies will be burned up and dissolved, and the earth and the works that are done on it will be exposed.

Time –time seems to fly everyday here. But even though we may think a lot of time has passed – that is not necessarily how God sees it. According to verse 8, a thousand years is like a day to God!  He does not work on our timetables. God exists outside of limited time.  (mind baffling right?)

While the scoffers think that God’s patience is a problem – we understand the purpose of His patience. The purpose is redemptive.

Consider this – the world has not ended yet because before the foundations of the world (Ephesians 4:1), God chose you and me to live in 2014 and become his children!

But then we see emphatically in verse 10…

…BUT… the day of the Lord WILL come!  Oh friends, He is coming and when he comes –it will be like a theif in the night!

11 Since all these things are thus to be dissolved, what sort of people ought you to be in lives of holiness and godliness, 12 waiting for and hastening the coming of the day of God, because of which the heavens will be set on fire and dissolved, and the heavenly bodies will melt as they burn! 13 But according to his promise we are waiting for new heavens and a new earth in which righteousness dwells.

14 Therefore, beloved, since you are waiting for these, be diligent to be found by him without spot or blemish, and at peace. 15 And count the patience of our Lord as salvation, just as our beloved brother Paul also wrote to you according to the wisdom given him, 16 as he does in all his letters when he speaks in them of these matters. There are some things in them that are hard to understand, which the ignorant and unstable twist to their own destruction, as they do the other Scriptures. 17 You therefore, beloved, knowing this beforehand, take care that you are not carried away with the error of lawless people and lose your own stability. 18 But grow in the grace and knowledge of our Lord and Savior Jesus Christ. To him be the glory both now and to the day of eternity. Amen.

Some applications from verses 11-18:

Watch and wait for the coming of the Lord.

Share the gospel as the Lord is patient unto salvation.

Do not get carried away by error or lose your stability.

Grow in the grace and knowledge of Jesus.

And one final (politically incorrect) thought:

While it is important that we steward God’s creation well, may we not spend our days trying to “save the planet.”  As we see in 2 Peter 3, God has plans to destroy our planet by fire.  May we have a godly perspective, which according to this passage would mean we long for the day the Lord returns and creates a new heaven and a new earth.  Until then, may we spend our time seeking to save souls rather than the planet.

**Chime In:  What have you learned this week through your study in the book of 2 Peter?

🍁🍂🏡. Today we begin the #MakingYourHomeAH

You are LOVED! The God of this universe loves you

🥳Just 1 day left until we begin - TOMORROW WE B