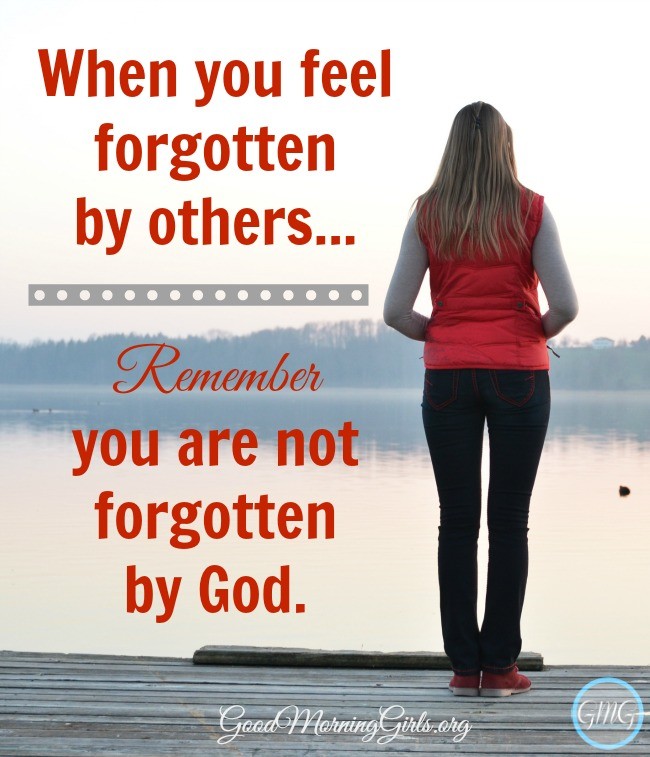 Have you felt forgotten?

Maybe you feel unappreciated or unnoticed by your husband or a child.

Maybe you have a father or mother who has walked out on you.

Or perhaps a friend has quit calling or caring.

Maybe you have missed church a lot lately and no one has called to see if you are okay.

Or maybe you have helped someone…more than once… and now you need them, and they are no where to be found.

And maybe, just maybe, you wonder sometimes if God has forgotten about you too.

Today, the Good Morning Girls are in Genesis 40 and looking at the life of Joseph.  Joseph received his coat of many colors and out of jealousy, his brothers sold him into slavery in Egypt.  But the Lord was with Joseph.

The Lord was with Joseph, and he became a successful man, and he was in the house of his Egyptian master. 3 His master saw that the Lord was with him and that the Lord caused all that he did to succeed in his hands. 4 So Joseph found favor in his sight and attended him, and he made him overseer of his house and put him in charge of all that he had.

The Lord was clearly with Joseph and giving him success…but then his master’s wife pursued him to lie with her –over and over. Joseph declined, over and over, until one day she grabbed him by the garment and as he ran away – she was left with his garment in her hands.

In her fury, she accused him of pursuing her and the king placed him in prison.

It’s in prison that Joseph met the chief baker and chief cub bearer.  One morning he saw they were troubled  and he asked why they were downcast.  They answered: they had a dream but no one to interpret their dream for them.

Joseph interpreted their dreams for them. Joseph told the chief cup bearer he would be released from prison in 3 days and he asked for a favor.  To be remembered.

14 Only remember me, when it is well with you, and please do me the kindness to mention me to Pharaoh, and so get me out of this house. 15 For I was indeed stolen out of the land of the Hebrews, and here also I have done nothing that they should put me into the pit.”

Notice that Joseph even tries to appeal to the cup bearers compassionate side. He tells a little of his story and the injustice he has suffered.

And so the cup bearer is released, just as Joseph foretold.  But then, this happened:

“the chief cupbearer did not remember Joseph, but forgot him.” (Genesis 40:23)

The cup bearer forgot ALL about Joseph!

No mercy, no compassion, no memory, nothin’.

If you are a woman with a big heart  –then you have felt the sting of giving and helping others, and then being forgotten.

The emotions that go hand in hand with feeling forgotten are dark.  It hurts.

But I’m reminded of the story in Luke 17 when Jesus healed the ten men of leprosy.  After healing them ONLY one returned to say thank you.  Only one!  Jesus asked the one who returned – “where are the other nine”?

Those other nine men, healed of leprosy, went on their merry way enjoying their new health.

When we see that the Lord of the universe was forgotten –we realize that none of us will escape being hurt by someone who has forgotten us.

I find that comforting.

One commentary writes this:

If Joseph’s brothers never sell him to the Midianites, then Joseph never goes to Egypt.

If Joseph never goes to Egypt, he never is sold to Potiphar.

If he is never sold to Potiphar, Potiphar’s wife never falsely accuses him of rape.

If Potiphar’s wife never falsely accuses him of rape, then he is never put in prison.

If he is never put in prison, he never meets the baker and butler of Pharaoh.

If he never meets the baker and butler of Pharaoh, he never interprets their dreams.

If he never interprets their dreams, he never gets to interpret Pharaoh’s dreams.

If he never gets to interpret Pharaoh’s dreams, he never is made prime minister.

If he is never made prime minister, he never wisely administrates for the severe famine coming upon the region.

If he never wisely administrates for the severe famine coming upon the region, then his family back in Canaan perishes from the famine.

If his family back in Canaan perishes from the famine, the Messiah can’t come forth from a dead family.

If the Messiah can’t come forth, then Jesus never came.

If Jesus never came, you are dead in your sins and without hope in this world. Thank you, Jesus!

Isn’t that powerful?  We see the sovereignty of God working in the life of Joseph.

That same sovereignty is working in your life as well!

Isn’t it comforting to know that all of our hurts and pains and trials are serving a greater purpose? None of it is wasted.

God loves you. You are not forgotten.

Do you relate to Joseph? Have you wrestled with feeling unfairly accused or forgotten?

How have you seen God work your pain and trials for his good?

What else have you learned in your quiet times this week?

BLOGGERS: Are you blogging through the Bible with us or have you written a devotional based on your own quiet times this week? Link back to GoodMorningGirls.org or put this graphic in your post and then link up below – we’d love to come visit you!