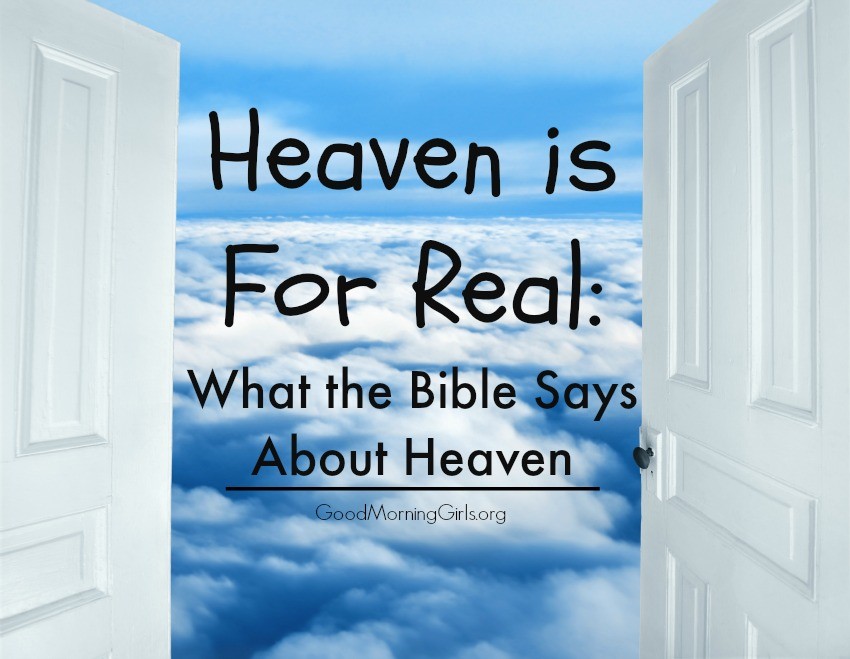 There have been a lot of books written about heaven that sit on the best seller lists. Clearly, people are curious about the after life. But rather than listening to a 4 year old’s story or hearing from the “Boy Who Came Back From Heaven” who recently announced it was a lie and he did not go to heaven –  I recommend we look into God’s Word and see what He says about HIS dwelling place.

As we read Exodus 26-30 this week, you may have felt bogged down with the details of the building of the tabernacle ….but check out what Hebrews 8:5 tells us we were reading about!

They serve a copy and shadow of the heavenly things. For when Moses was about to erect the tent, he was instructed by God, saying, “See that you make everything according to the pattern that was shown you on the mountain.”

The tabernacle is a copy or shadow of heavenly things.  We get a glimpse of heaven as we read Exodus 26-30!

This is why God warned Moses, that he make everything, according to the pattern he was shown on the mountain. (Exodus 25:9)

Since this is a blog post and not a book – our look at the symbolism will be an overview and not comprehensive.  Let’s dig in and see what we find at first glance.

God tells Moses in Exodus 25:3-7 to gather the items for the tabernacle:

“These are the offerings you are to receive from them: gold, silver and bronze; blue, purple and scarlet yarn and fine linen; goat hair; ram skins dyed red and another type of durable leather; acacia wood; olive oil for the light; spices for the anointing oil and for the fragrant incense; and onyx stones and other gems to be mounted on the ephod and breastpiece.”

First, they were to use the materials of gold, silver, and bronze to build the tabernacle.

Gold signifies purity and the deity of God.

Revelation 21:21 says of heaven: “the street of the city was pure gold, like transparent glass.”

Silver represents redemption.  Jesus was sold for 30 pieces of silver by Judas. No silver is ever mentioned in heaven because our redemption has already been paid for by Christ.

Bronze represents judgement.  The altars were made of bronze to withstand the intense heat of the fire of the sacrifices.

Then they were to use blue, purple and scarlet yarn.

The blue represents the heavenlies and God’s throne.

Ezekiel 1:26-28 tells us that God’s throne has the appearance of sapphire (blue).

The scarlet represents the blood shed for our sins.

Then they were to use fine-linen.  Revelation 19:6-8 says that we – the Bride of Christ – will be clothed in fine linen in heaven.  Look at what fine linen represents in the verses below:

6 Then I heard what seemed to be the voice of a great multitude, like the roar of many waters and like the sound of mighty peals of thunder, crying out,

“Hallelujah! For the Lord our God the Almighty reigns. Let us rejoice and exult and give him the glory, for the marriage of the Lamb has come, and his Bride has made herself ready; it was granted her to clothe herself with fine linen, bright and pure”— for the fine linen is the righteous deeds of the saints.”

Next was the use of goat hair and ram skins dyed red.

On the day of atonement a goat was set free as a scapegoat – carrying the sins of Israel away. This was a picture of Christ and how he has carried our sins away.

Do you remember the story of Abraham and Isaac on the mountain?  It was the ram caught in the thicket, that became the substitution for the offering to the Lord on that day.  The ram skins dyed red are a picture of Jesus Christ our savior as well!

Then they were to gather precious onyx stones and other gems.  Look at the picture of heaven Revelation 21:18-21 – gives us:

18 The wall was built of jasper, while the city was pure gold, like clear glass. 19 The foundations of the wall of the city were adorned with every kind of jewel. The first was jasper, the second sapphire, the third agate, the fourth emerald, 20 the fifth onyx, the sixth carnelian, the seventh chrysolite, the eighth beryl, the ninth topaz, the tenth chrysoprase, the eleventh jacinth, the twelfth amethyst. 21 And the twelve gates were twelve pearls, each of the gates made of a single pearl, and the street of the city was pure gold, like transparent glass.

I’ve only scratched the surface of the depth of what we have read this week.  There is so much more symbolism happening here with the Ark of the Covenant, table for bread, the golden lampstand, bronze altar, the oil for the lamp, and priestly garments.  All are mentioned in the book of Revelation and are a picture of the heavenly sanctuary we will one day see – with our own eyes!

We see the gospel does not begin in the New Testament with the book of Matthew – but rather it is interwoven from Genesis through Revelation!  We will revisit the tabernacle and it’s symbolism again as we read through the Bible because it is repeated through out the Bible.

If you are wanting to understand more, I encourage you to dig in and look for the symbolism yourself through the use of Bible Commentaries. One of my favorites is the Matthew Henry Commentary. (available free on-line -yay!)

But for now – let’s pause together and stand in awe of our God!  Bow low and worship Him today.

“Oh, the depth of the riches of the wisdom and knowledge of God!
How unsearchable his judgments,
and his paths beyond tracing out!

“Who has known the mind of the Lord?
Or who has been his counselor?”

“Who has ever given to God,
that God should repay them?”

For from him and through him and for him are all things.
To him be the glory forever! Amen. “

I left so much uncovered from this week’s reading. Please share what God has taught you in your private study of Exodus 26-30.  It can be related to this post or non-related. We love hearing how God is speaking to you.