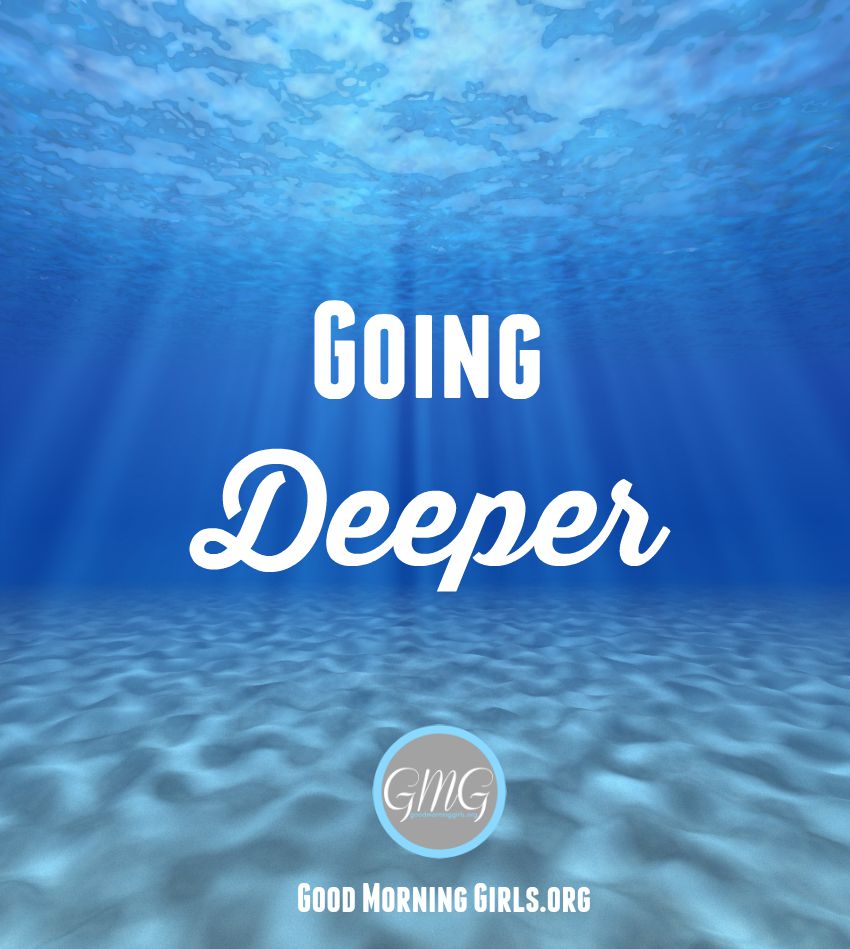 We are not spoon fed easy passages of scripture and we don’t skim over the hard parts.

You are not given daily devotionals here to explain the texts and you aren’t told what each difficult thing means. You write out scripture, your observations, applications and prayers and when you don’t understand something you ask our community or look it up.

You are a diligent community – hungry for the Word of God – and willing to work hard daily to understand and apply it to your lives!

I LOVE this about our community here!

The type of study we do here is called exegisis which is “the process of drawing out the meaning from a text in accordance with the context and discoverable meaning of its author.”  We are also using the inductive study method which is taking a passage of scripture and observing it, then interpreting it and then applying it to our lives.

After this work is done – it is beneficial to go to commentaries or trusted scholars to see what they drew from the text as well.  There is so much we can learn from others.

Every Wednesday, I will include one source per chapter we are studying as {optional} deeper study for those who are desiring more.

Then on Fridays, I’ll wrap up the week with what God is teaching me as well!

And when he had said these things, as they were looking on, he was lifted up, and a cloud took him out of their sight. (v. 9)

We see that in the ascension Jesus was taken up in a cloud. That’s not an insignificant detail. The cloud in the Scripture is a symbol of the presence and the glory of God, the Shekinah glory of God that manifested itself to the Old Testament Jews in a cloud, a pillar of cloud, the cloud that rested on Mount Sinai when God was revealing the Ten Commandments, the cloud that came and surrounded Jesus on the Mount of Transfiguration after Moses and Elijah appeared there with Jesus. Now the cloud symbolizes at the ascension that Jesus is entering back into the glory of God.”

When the day of Pentecost arrived, they were all together in one place. 2 And suddenly there came from heaven a sound like a mighty rushing wind, and it filled the entire house where they were sitting. 3 And divided tongues as of fire appeared to them and rested on each one of them. 4 And they were all filled with the Holy Spirit and began to speak in other tongues as the Spirit gave them utterance. (v.1-4)

The Day of Pentecost from Matthew Henry’s Commentary:

“We often read in the old Testament of God’s coming down in a cloud as when he took possession first of the tabernacle, and afterwards of the temple, which intimates the darkness of that dispensation. And Christ went up to heaven in a cloud, to intimate how much we are kept in the dark concerning the upper world. But the Holy Ghost did not descend in a cloud for he was to dispel and scatter the clouds that overspread men’s minds, and to bring light into the world.

But Peter said, “I have no silver and gold, but what I do have I give to you. In the name of Jesus Christ of Nazareth, rise up and walk!” (v. 6)

JR Miller writes:  “We may study the way Peter showed kindness to the beggar. There are a good many people who cannot give money to the needy–but they need not therefore do nothing. “Silver and gold have I none–but what I have–that give I you,” said Peter. He was a poor man. He had left all to follow Christ. He had no money with him that day to give to any beggar, and he might have heaved a sigh, dropped a tear, and then passed on to his evening prayers. But that was not what Peter did. He did not conclude that because he had no money with him, therefore he could not do anything for the poor man. He would give what he had to give.

Money is not the only thing people need. It usually the poorest alms that can be given. Kind words are better, love and sympathy are finer. So far as we know, Jesus never gave money to anyone–and yet there never was such another giver of blessings as He was. We cannot impart the same large measure of help that Jesus gave–but we can give the same kind of help. There is not one of us who cannot give to other things, which will enrich their lives far, more than if we put money into their hands. We can give a cheering word, if nothing else, to some weary one in the way; a word will brighten his heart for many a long mile. Courage put into a tired heart, sympathy into a sorrowing heart–are better than any gift of gold. None of us are too poor to give something to others. If we cannot give silver or gold–we can certainly give love and sympathy, which are better than money.”

And as they were speaking to the people, the priests and the captain of the temple and the Sadducees came upon them, 2 greatly annoyed because they were teaching the people and proclaiming in Jesus the resurrection from the dead. 3 And they arrested them and put them in custody until the next day, for it was already evening. 4 But many of those who had heard the word believed, and the number of the men came to about five thousand. (v. 1-4)

John MacArthur writes on How to Handle Persecution :

“The church has suffered persecution ever since what we’re going to see in Acts Chapter 4 began at all. Persecution (in America) is subtle today. It’s not what it used to be. Satan usually directs the persecution today not at the physical body, but at the ego. He directs his persecution at pride or acceptance or status, etc. And it’s really very effective.

Today the persecution that comes is more effective. It doesn’t make heroes out of anybody. And it’s a sad thing, while the church today is not being killed physically, the church has succumbed to a kind of living spiritual death…

Persecution always results in growth. Mark that. That has to be the beginning thing, because that’s your commitment to do what’s right even if persecution is involved. Persecution results in growth for many reasons. Number one, it strips off all of the dead weight. If you’re a part of a group of people that are having to lay their lives on the line for Jesus Christ, then we’re only going to have people in that group who are willing to do that, right?

And part of the problem of the church today are all the tares that are sown among the wheat and the easiest way to get rid of the tares is just to make the wheat pay the price…or make the church pay the price of total discipleship and the tares will just drop off because they’re not really that committed and don’t want to get that involved. And so as a church is persecuted, it is purified. The waste is stripped off, false believers leave, the strong are left and God works freely through them.”

Barnabas (which means son of encouragement), a Levite, a native of Cyprus, 37 sold a field that belonged to him and brought the money and laid it at the apostles’ feet.  5:1 But a man named Ananias, with his wife Sapphira, sold a piece of property, 2 and with his wife’s knowledge he kept back for himself some of the proceeds and brought only a part of it and laid it at the apostles’ feet. 3 But Peter said, “Ananias, why has Satan filled your heart to lie to the Holy Spirit and to keep back for yourself part of the proceeds of the land? 4 While it remained unsold, did it not remain your own? And after it was sold, was it not at your disposal? Why is it that you have contrived this deed in your heart? You have not lied to man but to God.” 5 When Ananias heard these words, he fell down and breathed his last. And great fear came upon all who heard of it. (4:36-5:1-5)

Barnabas “shines as one of the most mature, reliable, loveable leaders of the early church. And right here in Acts 4:36–37 Luke shows us how Barnabas’ trusted ministry began—it began with a demonstrated freedom from the love of things, and a heart of love for the poor. He sold his field and gave all the proceeds to the apostles. In this story he stands for the way true faith in Christ creates a bond of love for people and cuts a bond of love for things.

Ananias and Sapphira stand for the exact opposite, namely, people who have not really been changed on the inside by being satisfied with all that God is for them in Christ, but who still want some place in the visible church. The reason they drop dead is not because this happens to all hypocrites. For example, it doesn’t happen to Simon the Magician in Acts 8:20–24. The reason they drop dead is to give a stunning warning to the whole church that phony Christians will all end up this way, sooner or later.

God means for his people to fear hypocrisy. He means for us to be afraid of treating the Holy Spirit with contempt. Notice at the end of verse 5, after Ananias had died: “And great fear came upon all who heard of it.”

*Please Note: I am not endorsing every written work of the authors I share or the links shared in the comments below. Please use discernment as you click around. 😉

Share your reflections from this week’s study in Acts 1-5 in the comments below.

Remember thousands of women read here everyday. You never know when God could use your comment to help, comfort, guide and change another woman’s life!