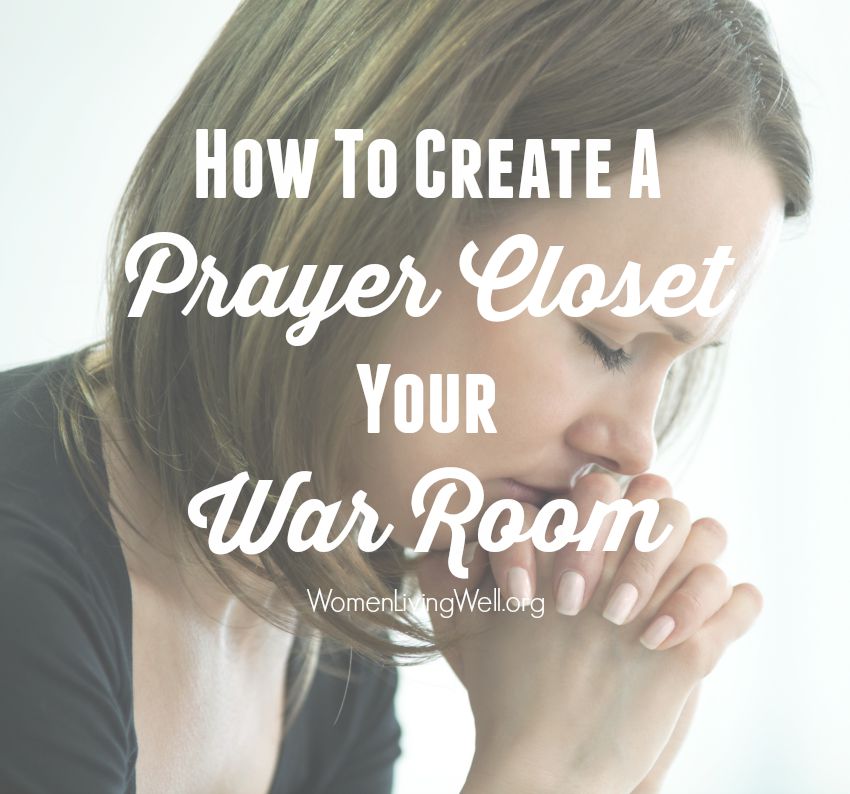 For those who have read my book, you’ve read about my prayer closets – my war rooms.

As a newlywed, I felt a need to create a “prayer closet” so I turned a walk in closet into a prayer closet.

In the closet, I put an inexpensive chair and footstool, a cheap night stand filled with journals, pens, my Bible and hymnal; a little water fountain and CD player in the corner, along with some photos of loved ones. This was the most inviting quiet time place I’ve ever had.

In our next home, I turned my vanity –in the master bathroom– into my sanctuary!  With little ones totting around – I found it hard to find a quiet moment to read my Bible and pray.  The bathroom seemed to be the only place I could truly be uninterrupted!

We took down the mirror, and I put up a dry erase board. Then, rather than using the drawers for makeup and accessories, I filled them with devotional books, highlighters, my Bible and planner, and set my computer on the counter top.  This is where I first began blogging – from my bathroom – Lol!  Actually – it was my war room. 😉

I have worked hard to create an escape from the distractions of life to be alone with God.

Do you have a place where you get alone to pray?

Maybe you have a chair in the family room or you prefer your kitchen table?  Perhaps it’s your car or a bench at the park.  In my college dorm, I would go to the stairwell or shower stall to get alone to pray.

At times, my prayer life has felt like a wrestling match – with distracted thinking, interruptions from kids, or worse…drifting off to sleep.  A thousand invisible enemies seem to fill the air the minute I sit down to pray.  Anyone else relate?

This is war my friends.

I have written about one solution to this struggle…my prayer journals (you can read about them here) but let’s look at Acts 6-10 and the prayers of those in the early church.

Forty-eight times in the book of Acts, it says, “They prayed.”

The power of the early church came through prayer.

Acts 6:4 says,  “But we will devote ourselves to prayer and to the ministry of the word.”

Acts 6:6 says, “they prayed and laid their hands on them.”

Acts 7:59 says, “And as they were stoning Stephen, he called out, “Lord Jesus,receive my spirit.”

Acts 9:11 says,  “And the Lord said to him, “Rise and go to the street called Straight, and at the house of Judas look for a man of Tarsus named Saul, for behold, he is praying.“

Acts 9:40 says,  “But Peter put them all outside, and knelt down and prayed; and turning to the body he said, “Tabitha, arise.” And she opened her eyes, and when she saw Peter she sat up.”

Acts 10:1,2 says, “At Caesarea there was a man named Cornelius, a centurion of what was known as the Italian Cohort, a devout man who feared God with all his household, gave alms generously to the people, and prayed continually to God.”

Acts 10:9 says “The next day, as they were on their journey and approaching the city, Peter went up on the housetop about the sixth hour to pray.“

Acts 10:30 says “And Cornelius said, “Four days ago, about this hour, I was praying in my house at the ninth hour”

There’s no time for lukewarm Christianity!

Prayer is a necessity!

We need women willing to pray fervently for their husband

willing to pray for their children

willing to pray for their grandchildren

willing to pray for their friends children

willing to pray for their co-workers, friends, relatives, neighborhoods, churches, communities, our sister’s and brother’s in Christ and the advancement of the gospel – around the world!

Stephen saw the heavens open and there was God in all His glory with Jesus giving him a standing ovation – that same God – is watching over you.

May we STOP neglecting the power of prayer in our lives and become prayer warriors.

Let’s create prayer closets and war rooms – in our closets – bathrooms – cars – wherever you can get alone!

Will you commit today to pray harder, longer, and more than you have been praying?

The effectual fervent prayer of a righteous man availeth much.
~ James 5:16