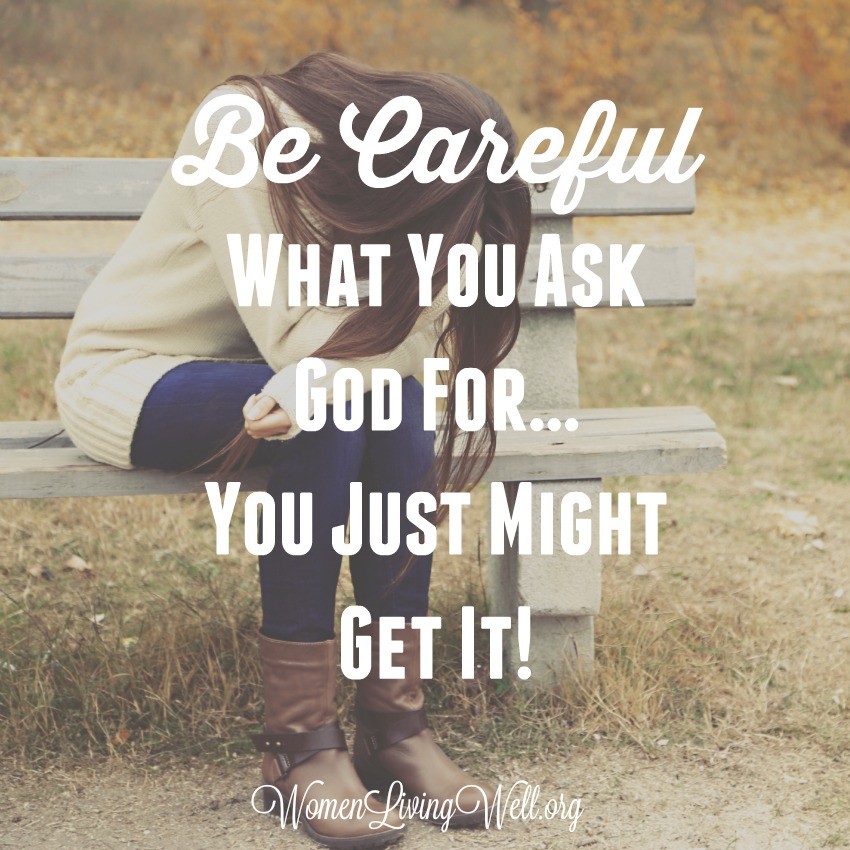 I remember a very long time ago, praying for my husband’s job.  I had asked (well actually begged) God to help a small deal that was on the table, go through.

It didn’t go through.

I was so disappointed that God did not answer my prayer with a yes.

A very short time later, perhaps just a few days, my husband came home from work and said he received an unexpected call and had successfully closed a new deal.

Then it happened, over and over for the next 5 years, this unexpected company would continue to need my husband’s services and they would come back time and time again for more.  Eventually, they became our bread and butter and I was humbled.  God was watching over us and providing for us despite my lack of faith and tears.

If God would have answered my original prayer about the smaller deal –  yes – then we would have missed the better plan that God had for us and I would have never known it.  I sat in tears over what I thought was an unanswered prayer, when God was providing for us tenfold through that unanswered prayer!

Be careful what you ask God for…

In Numbers 11, the Israelite people are on the move. The trumpets have sounded and the tents and tabernacle have been packed up and this huge mass of over 1 million people began to march towards the Promised Land.

The Israelites had grown comfortable in their camp and this move was a challenge for them.  I think we can all relate – change is hard on everyone emotionally.  But they made a massive mistake in the midst of their change.

“And the people complained in the hearing of the Lord about their misfortunes, and when the Lord heard it, “his anger was kindled, and the fire of the Lord burned among them and consumed some outlying parts of the camp.”

And God was angry.

Complaining is not acceptable in the sight of the Lord and for the Israelites, it was devastating as the Lord sent down fire and consumed some of the outlying parts of their camp!

But they did not learn their lesson…so again in Numbers 11:4 they cried out,

You see they had bread from heaven but they wanted more.  They were dissatisfied with God’s provision for them and they were not afraid to complain about it…but they should have been afraid!

Verse 10 tells us God’s response to their desire for meat:

“the anger of the Lord blazed hotly.”

18  ‘Consecrate yourselves for tomorrow, and you shall eat meat, for you have wept in the hearing of the Lord, saying, “Who will give us meat to eat? For it was better for us in Egypt.” Therefore the Lord will give you meat, and you shall eat. 19 You shall not eat just one day, or two days, or five days, or ten days, or twenty days, 20 but a whole month, until it comes out at your nostrils and becomes loathsome to you, because you have rejected the Lord who is among you and have wept before him, saying, “Why did we come out of Egypt?”’

Oh dear! The Israelites have done it.  They complained again and this time God said – I’ll give you what you asked for…

Be careful what you ask God for…

This was NOT a blessing!

And that is what happened.  In Numbers 11:31-34, we see God sending a strong wind that brought quail to their camp and the people rose all day and night to gather it and then verse 33 tells us,

“while the meat was yet between their teeth, before it was consumed, the anger of the Lord was kindled against the people and the Lord struck down the people with a very great plague. Therefore the name of that place was called Kibroth-hattaavah, because there they buried the people who had the craving. “

The people have complained and begged for meat and suddenly God is answering their prayers…can you imagine their excitement?

They probably ran around in a frenzy gathering the quail and feasting on it. Then -BAM!  A great plague hit and those who were craving the meat – died!

Numbers 11:35 tells us they named this place “Kibroth Hattaavah” – which means “Graves of Craving.”

And so I wonder, are you craving something today?

Is there something you are begging God for… that may be outside the will of God?

Be careful what you ask God for.

Ungodly cravings lead to death.  When we follow our fleshly appetites, they will lead us astray. They will take over our thinking, our passions and rule our lives and the worst thing God can do is GIVE us what we ask for…give us our craving!

Our cravings will become our spiritual grave if we do not master them.

Whatever it is today that is leading you astray – put it to death.  Rather than following your cravings – follow the Lord.  Seek God first and pray that his will be done in your life.

If you are craving something more
and want to learn how to live a satisfied life –
I encourage you to study the book of Ecclesiastes.

Have you studied the book of Ecclesiastes yet?

**It Was #1 on Amazon’s Best Selling Christian Devotionals List**