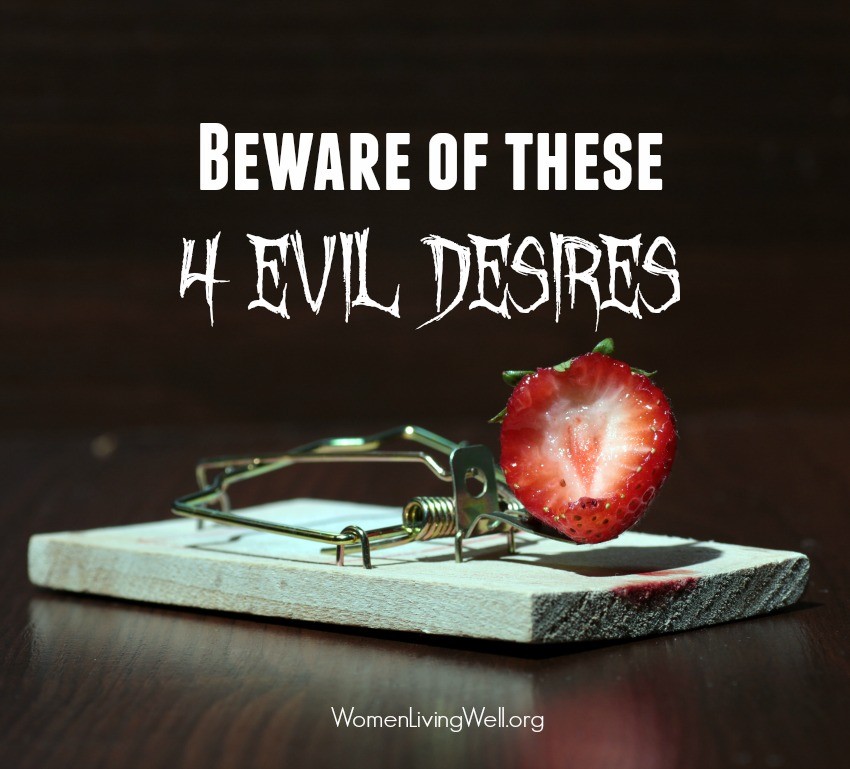 One of the greatest benefits of studying the Old Testament is how it makes the New Testament come alive!  If you have been faithfully reading the book of Numbers with us, then the passage I am about to share from the New Testament will suddenly take on a whole new, deeper meaning than it ever has before.

Read Paul’s words below as he warns us of 4 evil desires:

For I do not want you to be unaware, brothers, that our fathers were all under the cloud, and all passed through the sea, 2 and all were baptized into Moses in the cloud and in the sea, 3 and all ate the same spiritual food, 4 and all drank the same spiritual drink. For they drank from the spiritual Rock that followed them, and the Rock was Christ. 5 Nevertheless, with most of them God was not pleased, for they were overthrown in the wilderness.

6 Now these things took place as examples for us, that we might not desire evil as they did.

11 Now these things happened to them as an example, but they were written down for our instruction, on whom the end of the ages has come.

“They were written down for our instruction.”

Sometimes as we read the Old Testament, we tend to think it is just a bunch of stories and we struggle to find application or relevance to our lives.  This is a huge mistake!

Paul says – the book of Numbers was written down for our instruction – it’s for us!

Beware of These 4 Evil Desires

“Do not be idolaters as some of them were; as it is written, “The people sat and ate and drank and rose up and played.” (v.7)

God called the Israelites to be set apart from the other nations but they disobeyed in Numbers chapter 25. Not only did they eat and drink with the pagans but it says they bowed down and made sacrifices to Baal!

After all God had done for the Israelites and all the power God had displayed before them, they still gave into the temptation to bow down to Baal!

Friends, may we never think we are above worshipping other gods.  In our culture – we don’t have physical idols but anything we love more than God, enjoy more than God or treasure more than God – is idolatry.  It could be your husband, a hobby, your kids, success, your looks, sexual pleasure, or a sport.  It can be anything that comes before God.

“We must not indulge in sexual immorality as some of them did, and twenty-three thousand fell in a single day.” (v.8)

In Numbers chapter 25, the people of Israel began to “whore with the daughters of Moab…And the anger of the Lord was kindled…nevertheless, those who died by the plague were 24,000.”

These days, God does not send plagues as a consequence for immorality but it does not change the fact that God clearly detests sexual immorality and it leads to natural consequences.

3.) Beware of Complaining and Testing the Lord.

“We must not put Christ to the test, as some of them did and were destroyed by serpents.” (v.9)

In Numbers chapter 21, the Israelites complained about the food and water God had supplied them. They said “we loathe this worthless food.”  God punished them by sending fiery serpents that bit the people and they died!

Do not test the Lord.  When we complain against His provision for us – we are testing Him.

“Nor grumble, as some of them did and were destroyed by the Destroyer.” (v.10)

In Numbers chapter 14, the Israelites grumbled against the Lord – AGAIN!  God heard it and said: “your dead bodies shall fall in this wilderness, and of all your number, listed in the census from twenty years old and upward, who have grumbled against me.”

All the grumblers were destroyed!  Yikes!  Perhaps we should guard our lips much more than we do when it comes to grumbling!

12 Therefore let anyone who thinks that he stands take heed lest he fall.

13 No temptation has overtaken you that is not common to man. God is faithful, and he will not let you be tempted beyond your ability, but with the temptation he will also provide the way of escape, that you may be able to endure it.

Desires means a feeling of wanting to have something or wishing for something to happen.

Paul says – do not be prideful and think that you can’t fall into these temptations.  These evil desires have been common to ALL men down through the ages.   They are a trap – they appear much more beautiful and promising than what they can ever deliver.

If you are struggling with any of these – they are not unique to you – you struggle with these because you are human BUT God is faithful. He provides a way of escape for those who are tempted by their evil desires.

For the Israelites who chose to give into their evil desires, God put them to death.

May we not take advantage of God’s grace and instead choose to put to death our evil desires.  With God’s help – we can have victory and freedom through Christ!

How has studying the Old Testament made the New Testament come alive for you?

How has God provided a means of escape for you in times of temptation?

What else did you learn in your quiet time this week?