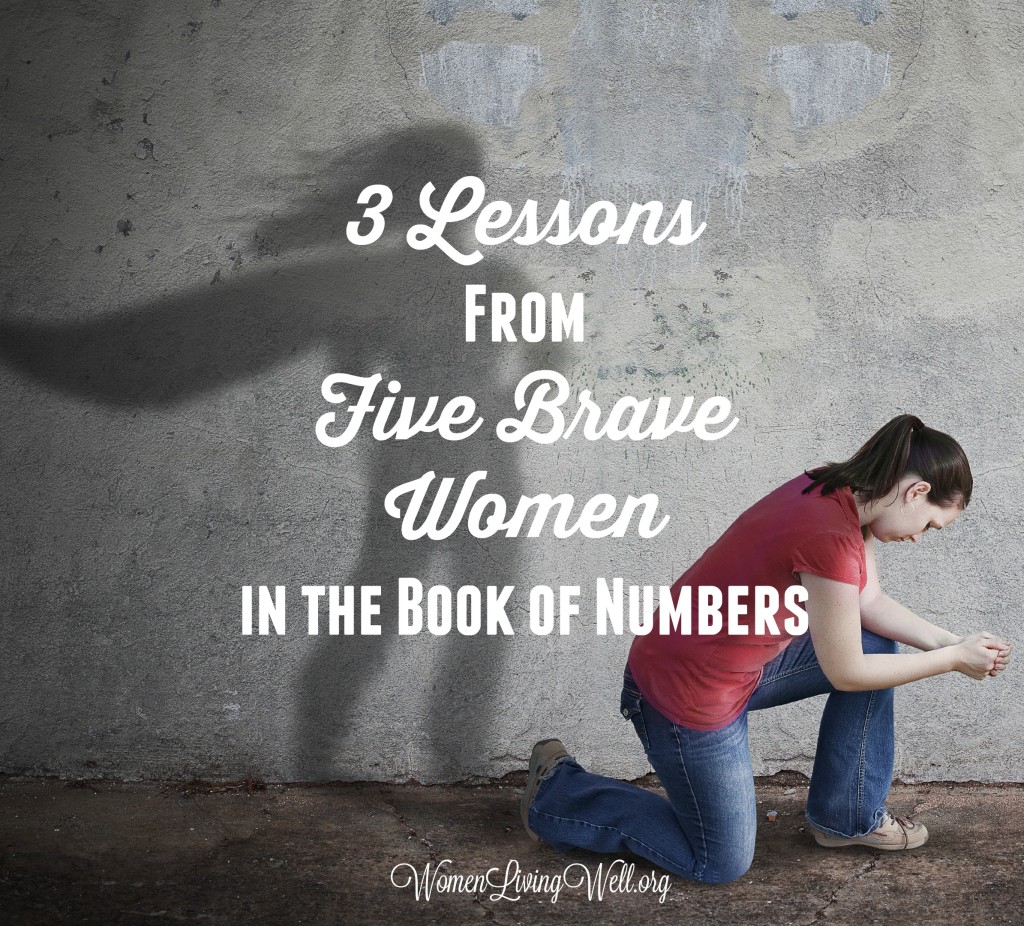 Today we are going to examine the lives of 5 brave women – the daughters of Zelophehad.

The name Zelophehad (which is almost impossible to pronounce Lol!) means “protection against fear.“

What protects us against fear?

Imagine this scene from Numbers chapter 27 with me.

The five daughters of Zelophehad boldly approached Moses, Eleazar the priest, the chiefs and all the congregation at the Tent of Meeting.

This was unheard of in this day in age!  Women going before the male leadership to question the law of inheritance – just did not happen.

If you look back at Numbers chapter 26, you will see that God called Moses to take a census of the new generation of Israel, who were about to enter the Promised Land.  Within this list you will find all the names of the males who were the heads of the tribes, clans and families.

The women were not numbered.

So this took great faith for the five daughters to approach Moses before all of the congregation of Israel!

The five daughters wisely made their plea to Moses.

Once the leaders and congregation were listening, they made their plea. I am sure they had butterflies in their stomachs and a tinge of fear, but these women were very wise.

First, they cleared their fathers’s name by declaring he was not a rebel.

“Our father died in the wilderness.  He was not among the company of those who gathered themselves together against the Lord in the company of Korah.” (v.3)

Then they made it clear, there were no sons to inherit the father’s land and asked if they could have their father’s inheritance.

Moses took their case before the Lord.

WOW! Moses listened and had compassion on these women.  He took this matter straight to God Almighty, the creator of the universe!

“The daughters of Zelophehad are right.” (v.6)

Gasp!  The creator of the universe heard the plea of these women and declared them as right and gave this statute and rule for all time to Israel:

“‘If a man dies and has no son, then you shall transfer his inheritance to his daughter.” (v.8)

Then they were granted the inheritance of their Father.

Because they had great faith.

1.) They had faith as they trusted in God’s provision for them.

These women were single women.  They could have played the victim card and moped about being orphans with no brothers and no land.  They could have gone from tent to tent complaining.  They could have rushed into marriage to solve their problem themselves.  But they did not. These were noble, godly women who trusted that God would provide for them and were willing to courageously step outside their comfort zone to see this happen.  They trusted the leadership of Moses and God to be gracious and just and because of their faith – they were protected against fear.

Do we have this sort of faith?  Sometimes I am tempted to talk about my fears or complain about them rather than face them with faith –head on.  We must not run from things that are hard – especially when we know we are doing what is right.  Let’s take strength from these women today and ask God to be used for change in this world!

2.) They did not live for the present. They had faith in God’s promises of a land to come.

This land these women were asking for, they had never seen.  In chapter 26, the Promised Land was being divided amongst the people.  The generation that went before them were fearful about entering the Promised Land and as a consequence they all died in the wilderness and did not get to enter the Promised Land.

The daughters of Zelophehad believed in a land to come. They believed it was good and they wanted an inheritance there.

Do we have this sort of faith?  Jesus told us of a place He is preparing for us – another land – heaven. This world is not our home. We are just passing through.  We must not live for today but for eternity. I cannot wait to enter the Promised Land of Heaven!

Oh that we would have the faith of these women – believing and not doubting, confident and sure that for those who are believers – heaven awaits us.

Jesus said:  “Let not your hearts be troubled. Believe in God; believe also in me. 2 In my Father’s house are many rooms. If it were not so, would I have told you that I go to prepare a place for you? 3 And if I go and prepare a place for you, I will come again and will take you to myself, that where I am you may be also.”
John 14:1-3

3.) They had faith they could be used by God to bring about change!

These 5 women had the courage to approach leaders to make a change!  As a result of their faith, they were given a portion just the same as the men.  They not only gained an inheritance for themselves but for ALL women, in this situation, for generations to come!

Do we have this sort of faith?  Oh that we would imitate the faith of these women!  Without faith we cannot please God. (Hebrews 11:6) They were young and focused. Life had dealt them a difficult hand as they had suffered a huge loss without their father’s protection.  But clearly, this father had raised them to walk with the Lord and to have faith.  They knew right from wrong which is why their request was granted from the Lord.

Sometimes I think we assume that once we are saved, blessings should just pour down from heaven on us.  This is not the case.

Sometimes blessings do not come until we have walked a painful road.

Sometimes blessings do not come until we have prayed hard to God, begging for change.

Sometimes blessings do not come until we step out in faith – way outside our comfort zone – and watch God work through us, despite our feeble selves.

Sometimes blessings do not come until we gather the courage to confront something that is wrong, to make it right.

I love this acronym for faith:

Will you forsake all today?

Will you dare to challenge something in this world that you know is wrong and push to make it right?  Are you willing to make a difference for generations to come?  Are you living for eternity today?

Step out in Faith today.

Do you struggle with fear?

Is God speaking to you today about something you should do?

What else did you learn in your quiet time this week?