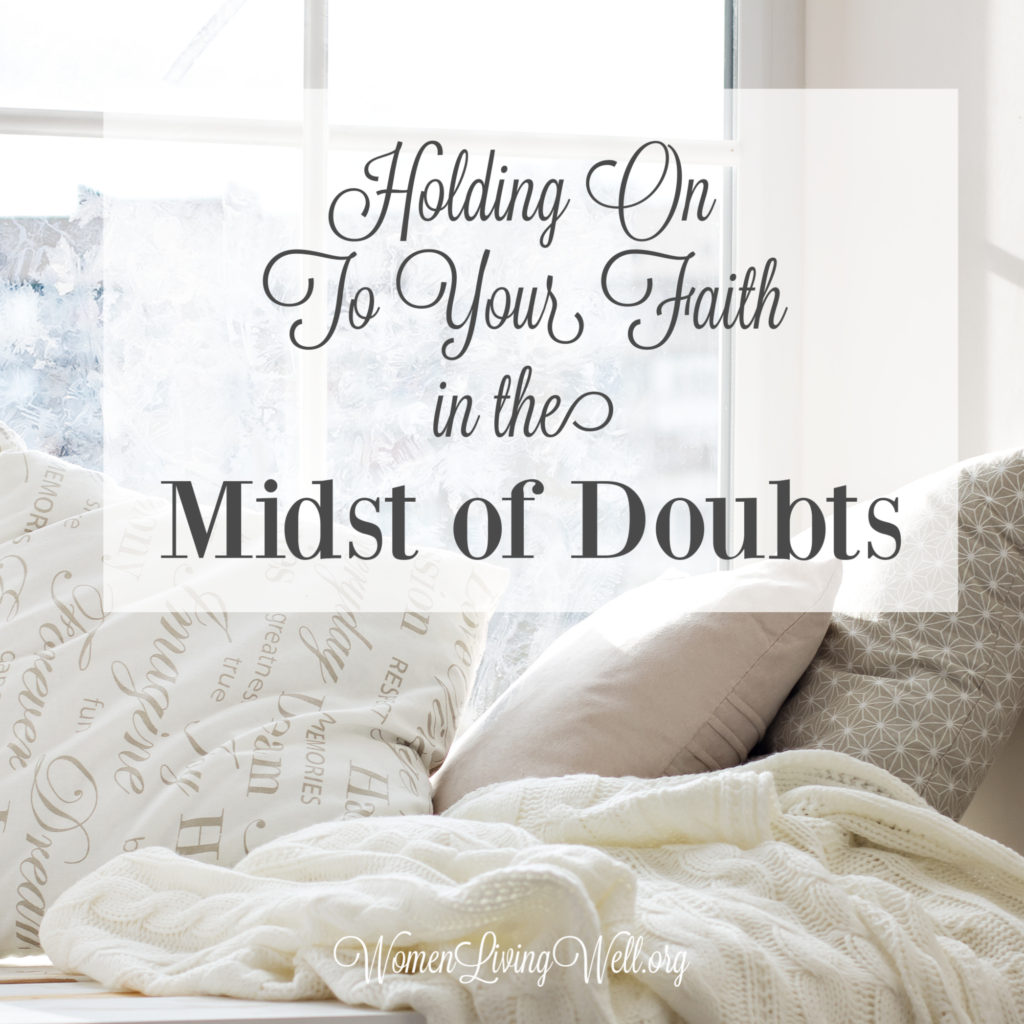 Doubt is the unique problem of a believer.

We have to believe in something, in order to doubt it.  So usually in the New Testament when it focuses on doubt, it is referencing believers.

Within the context of faith, doubt may arise when our burdens feel too heavy to lift.

Doubt may arise when expectations go unmet or when there seems to be no answer to a challenging situation.

Doubt may arise when we feel lonely, rejected or depressed or when we face struggle after struggle, with no end in sight.

Doubt may arise when we are walking with the Lord faithfully and then tragedy hits.

Doubt may arise when small lingering trials go on and on and we wonder where God is in the midst of it all.

Doubt arises because of our humanity and while it may be human – it is not okay to remain in a state of doubt.  The good news is, even in our doubts, the God we are not sure of,  is certain to meet us right where we are.  And so that brings us to today’s passage in John chapter 20.

After Jesus died on the cross, the disciples were gathered together in the upper room and Jesus appeared to them.  This is what happened next…

24 Now Thomas, one of the twelve, called the Twin, was not with them when Jesus came.

For some reason, Thomas missed the first appearance of Jesus to the disciples in the upper room.  Perhaps Thomas pulled away from everyone in his sadness and disconnected for a few days.  As a result of him not being with his brothers-in-Christ, he missed out on seeing Jesus.

25 So the other disciples told him, “We have seen the Lord.”

Thomas was not enthused to hear that they saw Jesus and he doubted it. He replied:

This was a high demand.  He not only wanted to see the nail marks but he wanted to touch Jesus’ wounds as well.  Without doing this, he said he would never believe.

Why did Thomas doubt?

Perhaps Jesus’ death on the cross was so bloody and gruesome that it was hard to believe he could be alive.  He may have thought, how does anyone just rise from that!

It’s interesting to note,  that Thomas is not one to humor the other guys or pretend that he believes, just to please them.  He is honest that he does not believe them and is left surrounded by his rejoicing friends, while he doubts.

26 Eight days later, his disciples were inside again, and Thomas was with them.

Jesus allowed time to pass before he would remove Thomas’ doubts.  The first time Jesus appeared to the disciples would have been on Easter Sunday and now he is appearing the following Sunday again.  This gives us the first example of Jesus meeting with believers on Sundays.

Although the doors were locked, Jesus came and stood among them and said, “Peace be with you.”

John emphasizes that the doors were locked.  Most likely the disciples were still a bit fearful and were remaining safe with the door locked.  It was good that they were all together.  Jesus had prayed before his death that they would grow in unity and oneness. He wanted them together.  But this meant that Jesus did not enter the normal way and so he tells them to have peace.  He does not want them to give way to their fears.

27 Then he said to Thomas, “Put your finger here, and see my hands; and put out your hand, and place it in my side. Do not disbelieve, but believe.”

Jesus did not scold Thomas.  He already knew what Thomas needed to believe and so he graciously offered him evidence.  Jesus did not have to show his scars but he loved Thomas and so he gave him what he asked for.  But then he requires of him to stop disbelieving and believe.

29 Jesus said to him, “Have you believed because you have seen me? Blessed are those who have not seen and yet have believed.”

Jesus offers a special blessing to those of us who believe without seeing.  We all live over 2,000 years after Jesus walked this earth and yet we suffer no loss from not getting to walk with him in the flesh.

You see the testimony of the disciples should have been enough for Thomas.  Jesus wants us to be satisfied with his word and the testimony of other believers and not yearn for special experiences, in order to trust in Him.

And so John closes this chapter with these words:

30 Now Jesus did many other signs in the presence of the disciples, which are not written in this book; 31 but these are written so that you may believe that Jesus is the Christ, the Son of God, and that by believing you may have life in his name.

Jesus did many other signs but John did not record them because he knew that the purpose of his book had been accomplished.  By reading the book of John from beginning to end, we have sufficient evidence to believe that Jesus Christ is the Son of God.  In the book of John, we see Jesus turn water into wine, heal the nobleman’s son, heal the lame man, feed the 5,000, walk on water, heal a blind man, raise Lazarus from the dead and raise himself from the dead!

Some will accuse us of having blind faith, but it’s actually unbelief that is blind.

But even for those of us who do believe, there are days when we wrestle with the deepest darkest questions of life.  There are times when I’ve wondered why God allows things to be so hard for believers who are trying to obey his Word…and I’m reminded of the father in Mark 9, whose son was demon possessed.  Jesus said he could heal the boy and the boy’s father exclaimed in desperation:

“I do believe; help me overcome my unbelief!”

I so relate to this father. When we see our children suffer, it can shake our faith to the core. This father believed.  He truly believed and yet he begged the Lord to help him overcome his unbelief!

Have you been there – you believe and yet you feel unbelief creeping in?

When you are tempted to doubt – quickly run to the cross!   When we take a look at the cross, it is there we find the evidence of God’s deep, deep love for us.

When trials come and doubts begin to enter your mind,  remember that we have such a limited perspective of life.  God has a plan and purpose that we may not see just yet.

We must fight doubt with faith.

Remain in God’s Word.  Stay tight with Jesus.  When we are tight with Jesus – there is nothing that can shake our faith and we can have a solid, deep abiding faith because we know that our loving God is in complete control.

Have you gone through seasons of doubt? What caused you to doubt and how did you overcome it?