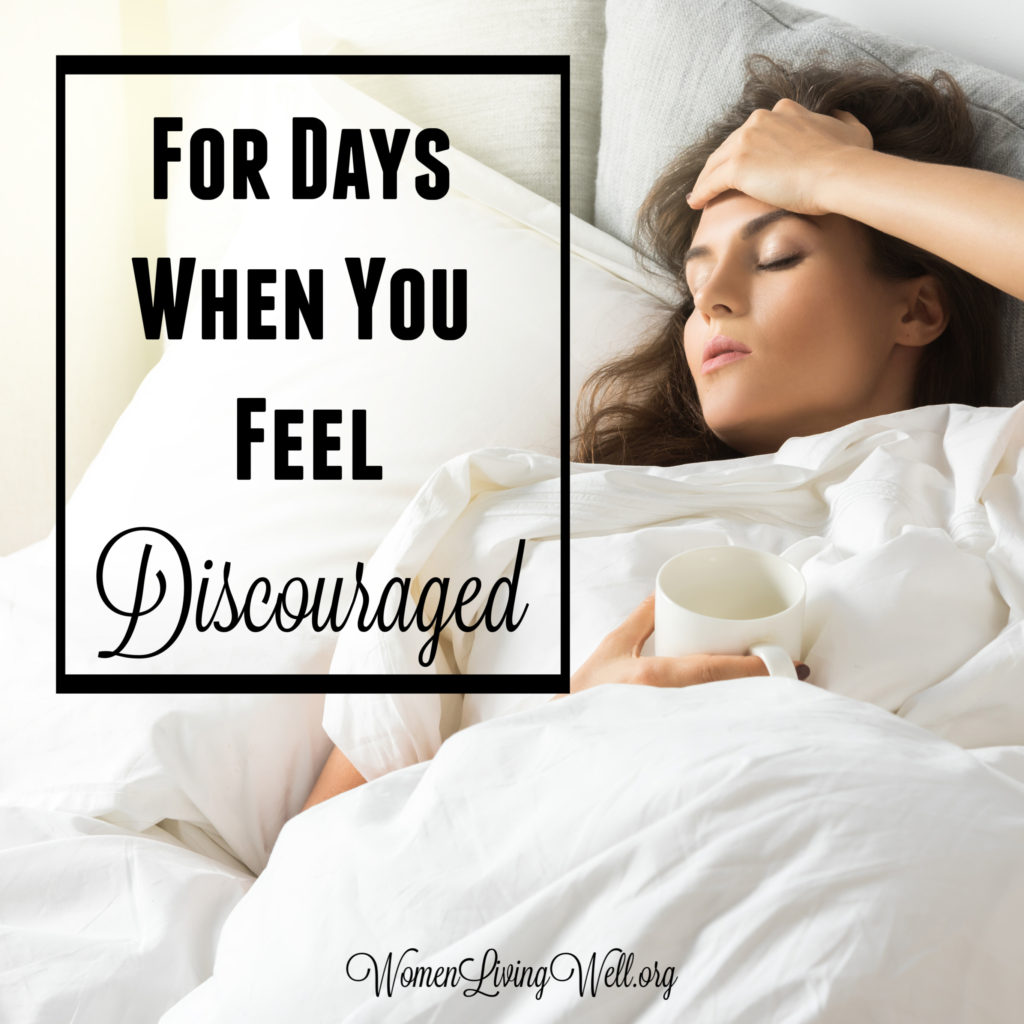 Are you a faithful follower of God, who prays regularly and knows the power of God, and yet you find yourself facing discouragement?  I want you to know that you are not alone.  So many other believers around the world face the same discouragement and I want to tell you to keep on going! Do not listen to the lies of the enemy!

In 1 Kings 17 through 19 and 2 Kings 1 and 2, we see the life of the infamous prophet Elijah. Elijah was a man who faithfully followed the Lord, had a powerful prayer life and experienced the power of God over and over again and yet he came to this moment of despair in 1 Kings 19:4 where he said to God:

O Lord, take away my life, for I am no better than my fathers.”
5 And he lay down and slept under a broom tree.

Elijah was so discouraged…he wanted to die!

Now let’s back up and see what led Elijah — to this dark place.

Elijah had a powerful prayer life.

In 1 Kings 17, an evil king named Ahab was reigning in Israel and Elijah said this prayer:

“As the Lord, the God of Israel, lives, before whom I stand, there shall be neither dew nor rain these years, except by my word.”

In the book of James, we are told more about this powerful prayer that Elijah prayed:

17 Elijah was a man with a nature like ours, and he prayed fervently that it might not rain, and for three years and six months it did not rain on the earth. 18 Then he prayed again, and heaven gave rain, and the earth bore its fruit.
(James 5:17,18)

As we look at the larger than life figure of Elijah we must remember, Elijah was a man just like us.

Elijah was always in the center of God’s will yet things did not always go his way.

2 And the word of the Lord came to him: 3 “Depart from here and turn eastward and hide yourself by the brook Cherith, which is east of the Jordan. 4 You shall drink from the brook, and I have commanded the ravens to feed you there.” 5 So he went and did according to the word of the Lord. He went and lived by the brook Cherith that is east of the Jordan. 6 And the ravens brought him bread and meat in the morning, and bread and meat in the evening, and he drank from the brook. 7 And after a while the brook dried up, because there was no rain in the land.
(1 Kings 17:2-7)

Friends, you may be in the center of the will of God and suddenly you hit a dead end road.  Trust that God is in control.  He may be moving you on to somewhere or something else.

Then the word of the Lord came to him, 9 “Arise, go to Zarephath, which belongs to Sidon, and dwell there. Behold, I have commanded a widow there to feed you.”10 So he arose and went to Zarephath.

Elijah followed God’s lead.  We must keep listening to the voice of the Lord.  What he tells us to do in his written word, keep doing.  Follow God’s lead.

Elijah experienced the sovereignty of God.

10 So he arose and went to Zarephath. And when he came to the gate of the city, behold, a widow was there gathering sticks.

In verse 9, God had told Elijah that he had commanded a widow to feed him and so he goes and behold!  A widow was there just as God said.

Elijah trusted God.  We can trust God and take him at his Word.  God’s promises are sure!  What God says he will do, he will do.

Elijah assured others to not fear and have faith.

And he called to her and said, “Bring me a little water in a vessel, that I may drink.” 11 And as she was going to bring it, he called to her and said, “Bring me a morsel of bread in your hand.” 12 And she said, “As the Lord your God lives, I have nothing baked, only a handful of flour in a jar and a little oil in a jug. And now I am gathering a couple of sticks that I may go in and prepare it for myself and my son, that we may eat it and die.” 13 And Elijah said to her, “Do not fear; go and do as you have said. But first make me a little cake of it and bring it to me, and afterward make something for yourself and your son. 14 For thus says the Lord, the God of Israel, ‘The jar of flour shall not be spent, and the jug of oil shall not be empty, until the day that the Lord sends rain upon the earth.’” 15 And she went and did as Elijah said. And she and he and her household ate for many days. 16 The jar of flour was not spent, neither did the jug of oil become empty, according to the word of the Lord that he spoke by Elijah. (1 Kings 17:11-16)

This story could be an entire blog post on its own, so I’m sad to gloss over it, but we have to keep moving because there’s so much more to cover!

But here we see a widow, who only had one meal left, and yet Elijah inspired her to trust God that her flour and oil would not run out. He inspired her to not fear and have faith.  He asked her to make a cake for him first and then for her and her son.  And she did it and the flour and oil did not become empty!

17 After this the son of the woman, the mistress of the house, became ill. And his illness was so severe that there was no breath left in him… 19 And he said to her, “Give me your son.” And he took him from her arms and carried him up into the upper chamber where he lodged, and laid him on his own bed. 20 And he cried to the Lord, “O Lord my God, have you brought calamity even upon the widow with whom I sojourn, by killing her son?” 21 Then he stretched himself upon the child three times and cried to the Lord, “O Lord my God, let this child’s life come into him again.” 22 And the Lord listened to the voice of Elijah. And the life of the child came into him again, and he revived.
(1 Kings 17:17-22)

Through the power of God, Elijah raised the widows son back to life!

And then in a show down between Elijah and the prophets of Baal, Elijah doused his bull offering with water and poured more water into the surrounding trenches and then he prayed:

“O Lord, God of Abraham, Isaac, and Israel, let it be known this day that you are God in Israel, and that I am your servant, and that I have done all these things at your word. 37 Answer me, O Lord, answer me, that this people may know that you, O Lord, are God, and that you have turned their hearts back.”

And look what happened:

38 Then the fire of the Lord fell and consumed the burnt offering and the wood and the stones and the dust, and licked up the water that was in the trench. 39 And when all the people saw it, they fell on their faces and said, “The Lord, he is God; the Lord, he is God.” 40 And Elijah said to them, “Seize the prophets of Baal; let not one of them escape.” And they seized them. And Elijah brought them down to the brook Kishon and slaughtered them there.(1 Kings 18:36-40)

Friends, we serve the same God as Elijah!

And then the rain began and Elijah ran to Jezreel in a speed that is faster than horses according to 1 Kings 19:46.  There he learns that King Ahab’s wife, Jezebel, is seeking to kill him…

and all of that leads us to finding Elijah…

under the broom tree…

praying that the Lord take his life.

He is completely discouraged.

The word discouraged means a loss of courage to go on.

And yet, he had experienced great answers to prayer!

He had experienced great miracles!

And he had experienced the great power of our God!

None of us are above feeling alone and discouraged.  Even the strongest of Christians grow weary.  I’m so thankful that the scriptures include this very real and authentic look at the human emotions of a godly man.

Discouragement is a battle we all face and seeing Elijah wrestle with it shows us that we are not alone.

Elijah was not alone!

The problem with his discouragement was that he had a limited perspective.

Elijah had an amazing legacy that he could not foresee.

In Matthew 17, Elijah appears again at the transfiguration of Christ!

17 And after six days Jesus took with him Peter and James, and John his brother, and led them up a high mountain by themselves. 2 And he was transfigured before them, and his face shone like the sun, and his clothes became white as light. 3 And behold, there appeared to them Moses and Elijah, talking with him. 4 And Peter said to Jesus, “Lord, it is good that we are here. If you wish, I will make three tents here, one for you and one for Moses and one for Elijah.” 5 He was still speaking when, behold, a bright cloud overshadowed them, and a voice from the cloud said, “This is my beloved Son, with whom I am well pleased; listen to him.” 6 When the disciples heard this, they fell on their faces and were terrified.
(Matthew 17:1-6)

And in James 5, he is used as an example of the type of prayer warrior we ought to be!

The prayer of a righteous person has great power as it is working.17 Elijah was a man with a nature like ours, and he prayed fervently that it might not rain, and for three years and six months it did not rain on the earth. 18 Then he prayed again, and heaven gave rain, and the earth bore its fruit.

Just like Elijah, when we take our eyes off of God and his power and we focus on our fears and troubles of life, we will face discouragement.  Elijah struggled just like we do yet, he continued on in trusting God and he continued to be used mightily by God.

Do not give up!

Know that you are not alone and trust that God has a legacy for you to live out!