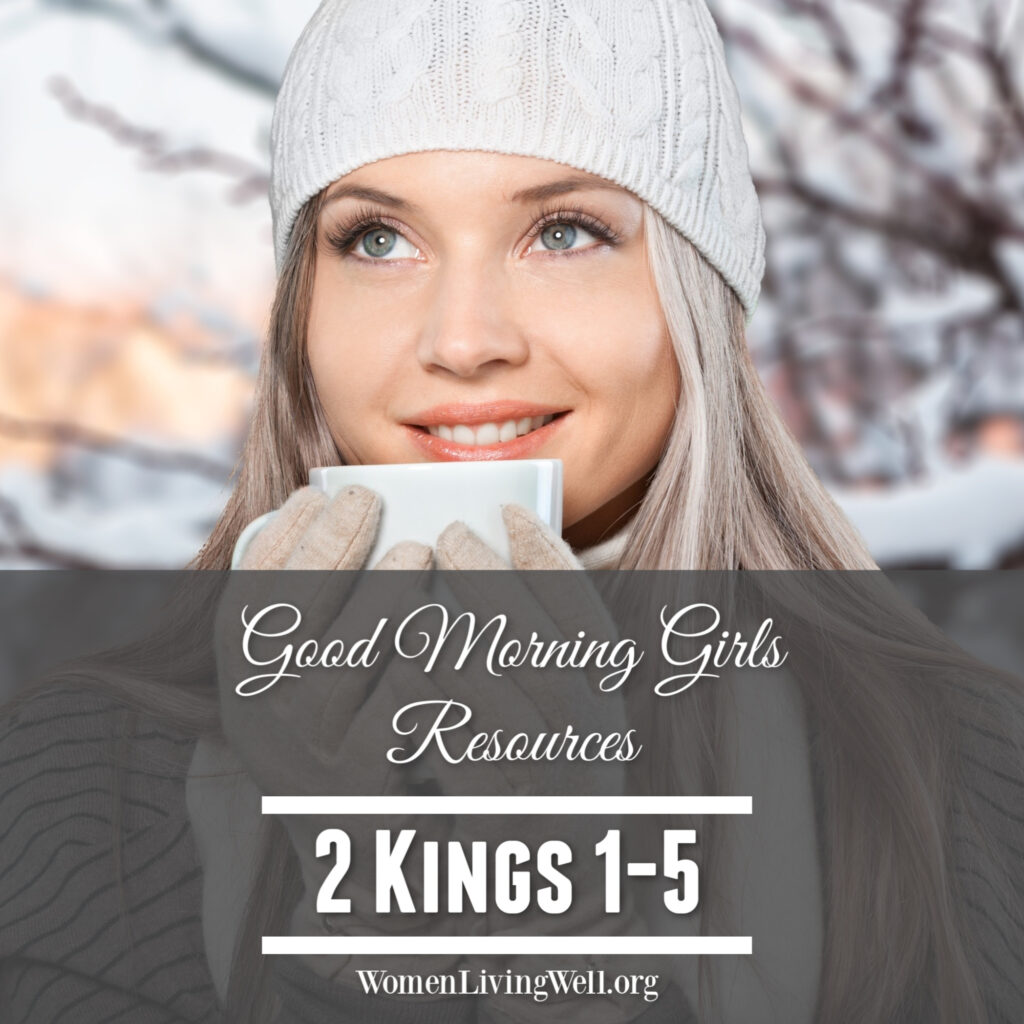 I am so excited to begin the Book of 2 Kings with you!
If you do not have the optional Journal yet – it’s still available on Amazon.

Now, let’s get started with an overview of 2 Kings.

You do not have to have studied 1 Kings in order to study 2 Kings with us.

While 2 Kings is a continuation of 1 Kings – the book stands alone and is understandable on it’s own. But for those who missed the 1 Kings study or for those who need their memory refreshed about 1 Kings – here’s what 1 Kings was all about.

In 1 Kings, we saw the rise and fall of both good and bad kings, starting with David.  One of the well-known stories from 1 Kings is when God offers Solomon anything he desires, and he asks for wisdom.  Solomon is given the gift of wisdom and he builds a magnificent temple for the Lord.  Following this great project, Solomon falls into sin and does not end as well as he started.

Once the kingdom is divided, the kings go from bad to worse and commit idolatry and other evil acts. The bright lights in the midst of those dark days were the great prophets of Elijah and Elisha, who were faithful to God in all they did.

Originally, the books of 1st and 2nd Kings were one book. These books cover almost 500 years of the kingship of Israel and Judah.  This video below is a great explanation of both 1st AND 2nd Kings!

In 1 Kings, we saw David and Solomon in all their royal splendor.  But Solomon sinned and the kingdom was divided.  So, in 2 Kings we will sadly see, one bad king after another fall.  We will also see the spiritual decline and eventual captivity of both kingdoms.

While none of the kings of Israel did what was right in the eyes of the Lord, four of the kings of Judah did.  Joash, Uzziah, Hezekiah and Josiah attempted to remove the idolatry from Judah, but in the end, it was not enough.

The ministry and miracles of the prophet Elisha are a bright light in these dark times.  Elijah performed 7 miracles in 1 Kings, but a double portion of the spirit was given to Elisha. So, in 2 Kings, it is recorded that he performed 14 miracles.

God continually raised up prophets to speak to the nation of Israel and to tell them to turn from their wicked ways, but they did not listen.  As a result, 2Kings 10:32 says, ”In those days the Lord began to cut off a part of Israel.’‘

At the end of 2 Kings, the Babylonian empire destroys the temple and the people are taken into exile. But we are given a glimmer of hope in the end, because God is not done with his people.

We can learn more about these kings by reading 1 & 2 Chronicles and studying the prophets that prophesied during this time period.  Those prophets include Amos and Hosea, who were sent to Israel and Obadiah, Joel, Isaiah, Micah, Nahum, Habakkuk, Zephaniah and Jeremiah, who were sent to Judah.

2 Kings gives the history of the kings and prophets of Israel and Judah, leading up to their exile.

The Author: Although the author is anonymous, tradition holds that 2 Kings was written by Jeremiah.

Time Period: This book was written around 550 B.C.

Judah from Hezekiah to Babylonian Exile (18-24)

The fall and captivity of Judah (25) 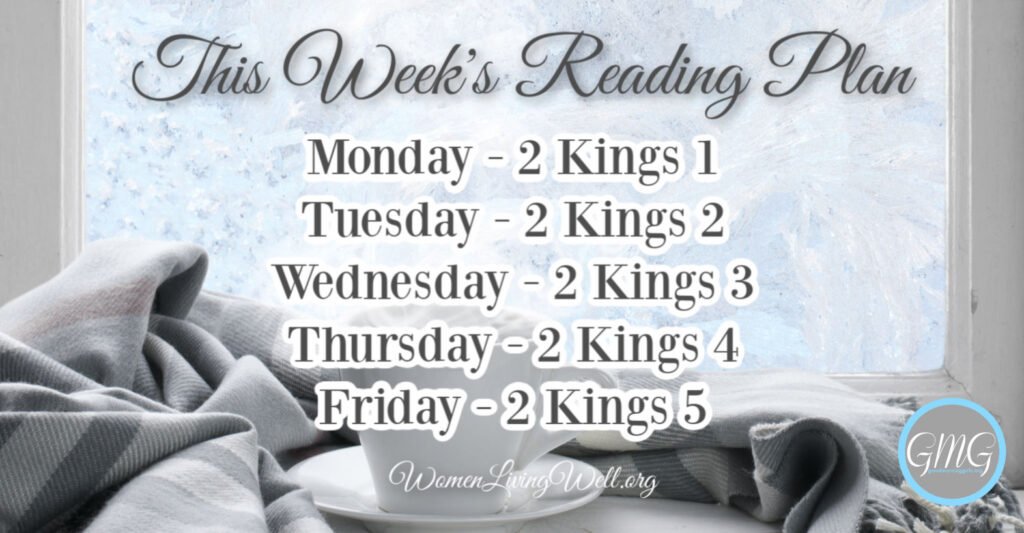 (Leaders: Copy and paste these into your groups.  If you do not have a group, use these for a personal time of reflection.)

After King Ahab died, his son Ahaziah took the throne but soon after, he had a serious accident.  Ahaziah sent messengers to the god, Baal-zebub, to find out if he would recover.  Instead, he received word that Elijah said he would die.  Ahaziah did not like this answer and so he sent a captain and fifty men to question Elijah, but fire from heaven came down and consumed them.  After repeating this mistake twice, finally his captain came with humility. Elijah went with him to meet Ahaziah and once again predicted that he would die. Then Ahaziah died, fulfilling Elijah’s prophecy.

In his times of trouble, Ahaziah turned to the wrong god.  Since his god was not real, he got no real help. We must be careful where we look for answers.  We must not avoid God just because we are afraid that we may not like his answers.  Who or where do you turn in times of trouble?  Are the people that you turn to godly and wise?  Is God the first place you turn or last?

As the prophet Elijah is about to be taken up into heaven, he offers Elisha anything he asks.  Elisha asks for a double portion of his spirit.  Then chariots of fire appear, and Elijah is taken up in a whirlwind. After this, Elisha takes Elijah’s cloak and strikes the water and parts the Jordan, demonstrating that he had indeed received the double portion he asked for.

In a tender moment, Elisha had the opportunity to ask for anything he desired.  He chose to ask for more of God’s power.  If you had the same choice, what would you choose?  Also, we see the two men cross the Jordan together in verse 8.  Then Elisha crosses alone in verse 14.  It is not easy to step out alone and simply trust in God as Elisha did.  Is there an area in your life where God is calling you to step out and walk alone?  How can you trust God more as you walk this path alone?

The king of Israel joined with 2 other kings against Moab and yet he still was not finding victory.  They were without water and so they called for Elisha.  Elisha called for a musician and notice how God used the musician to usher in God’s word to the prophet. (If you serve in music ministry, be encouraged – you have a sacred ministry!) The Lord responded in mercy and not only sent a flash flood to help them survive, but he also gave them the victory.

Once the kings were not only losing but also their people were about to die of thirst, they realized this was a spiritual issue and they needed God.  Elisha told them, the water they were asking for was “a light thing in the sight of the Lord” and that God would give them even more – victory!

Sometimes we are just like these three kings and we wait too long to seek the Lord’s help.  We do not realize that some of our physical issues are spiritual issues.  Things that we think are simply too hard for even God, we fail to pray for.  Are you fighting a battle right now that you feel defeated in?  Write a prayer below asking God to deliver you.  Our God is able!

Elisha performed many miracles, but we see that it required radical faith from the widow, the Shunammite woman, the person who took the next bite of the stew, and the servant who fed the men.  Elisha did not miraculously make the oil appear for the widow. She had to go to her neighbors and tell them about her situation. She had to ask to borrow their vessels and she only received as much oil as she was willing to ask from her neighbors.  She had to die to herself and her pride and ask for help, in order to see the power of God displayed in her life.  But it was in private, when the door was shut, that the oil flowed.

Is there an area in your life where you need help?  Is it hard for you to let others know when you have a need?  Write the need below and consider who you could ask to help meet this need.  Perhaps you need to go to your pastor, a friend or a neighbor.  Trust that letting others know your need, could be the very way in which the Lord wants to provide for you.

Naaman, a mighty man of valor, was at the top of his game but he was dying of leprosy.  A brave little girl from Israel told him about the prophet Elisha.  If she had been wrong, she would have been in danger, but she was right.  Elisha sent word that Naaman should wash in the Jordan seven times to be healed but this did not meet Naaman’s expectations.  It angered him.  He expected Elisha to come to him and cure him.  Instead, it required Naaman to act in faith and do it himself.  Naaman was healed without Elisha being nearby and as a result, God received all the glory.

Elisha repeatedly asked those who were seeking the Lord’s help to take part in their miracles. It required faith from those who sought the Lord.  As a result, God received all the praise, rather than Elisha.  Elisha’s instructions were simple yet very difficult for a prideful man.  Naaman had to overcome his pride in order to receive from the Lord.  Reflect on your own life. In what area do you struggle with pride especially when it comes to following the Lord?  And in what area are you leaning too hard on another person, rather than on God?

To print the 25 Discussion Questions for 2 Kings – Click Here.

This Week’s Verses of the Day:

(Leaders: You can use these images in your groups by using right click and “save as” or screen shot them.) 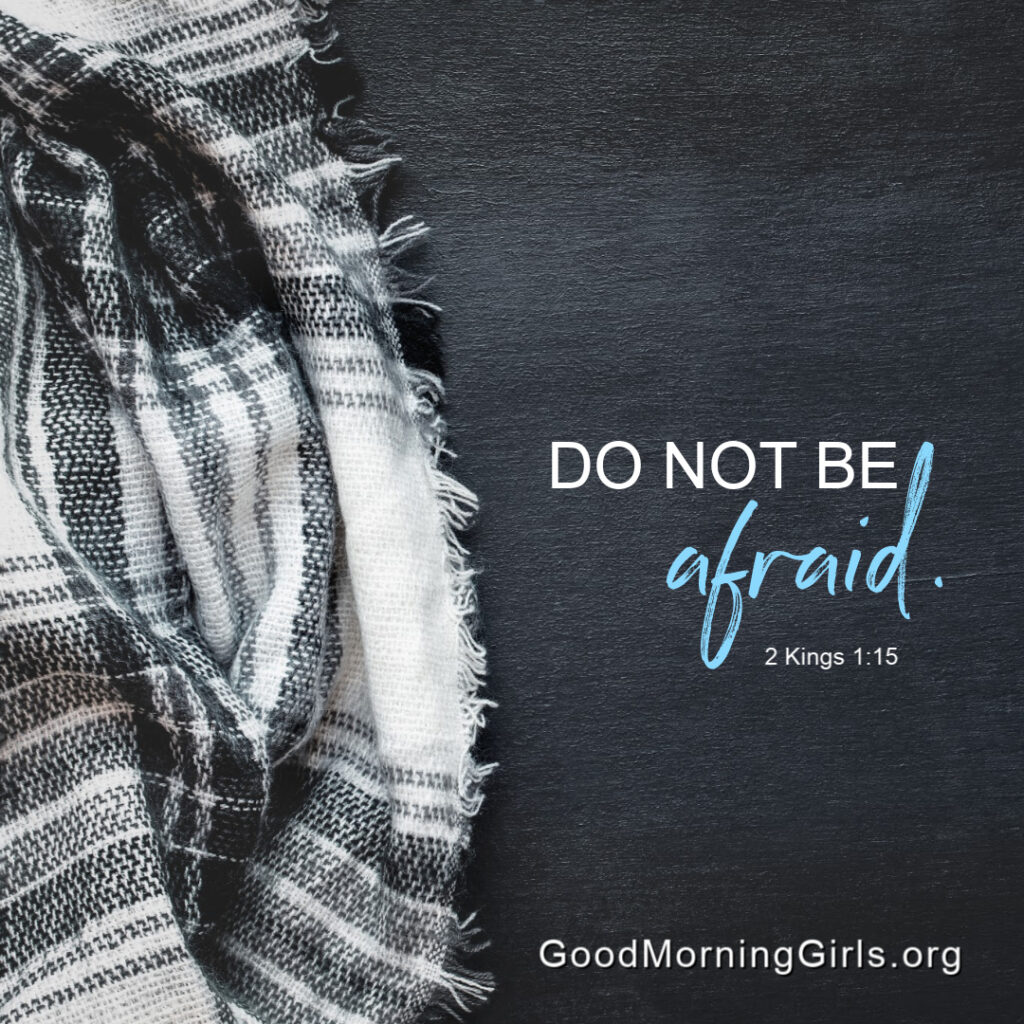 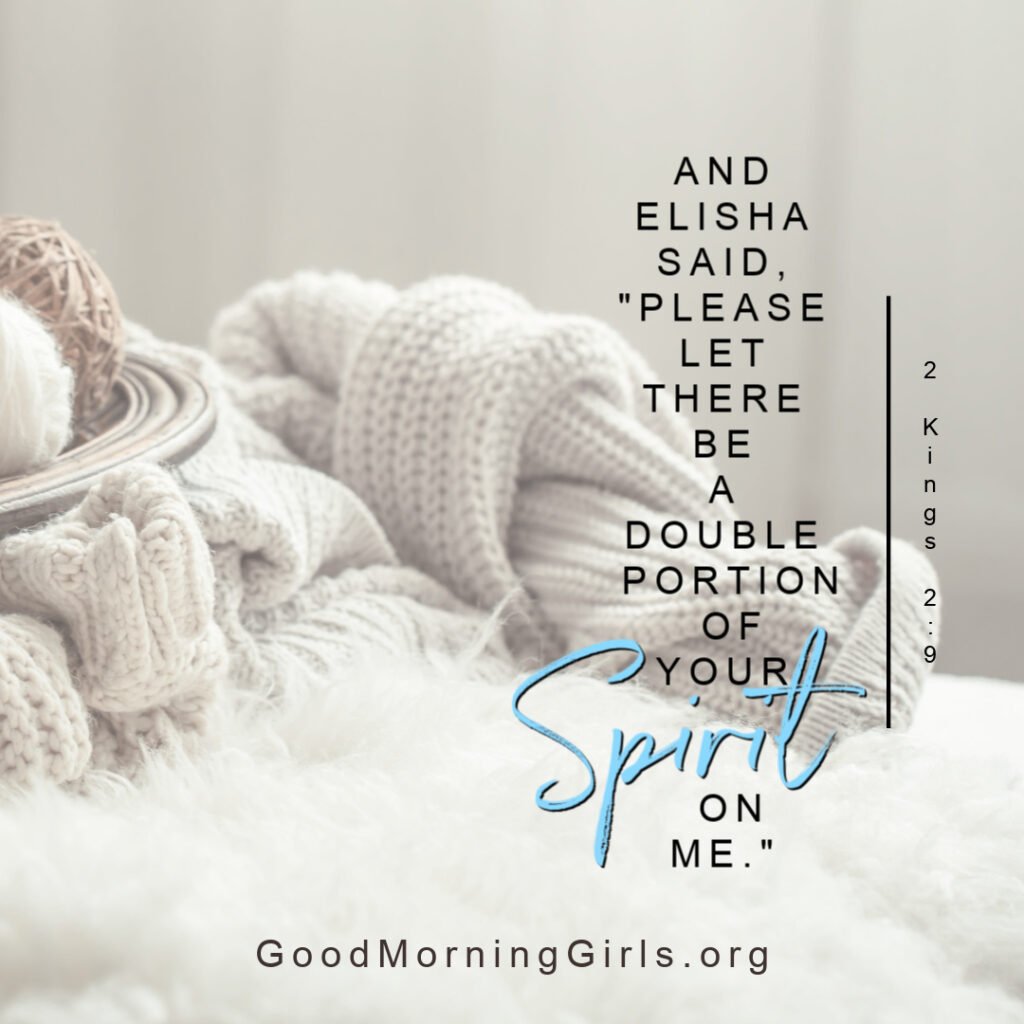 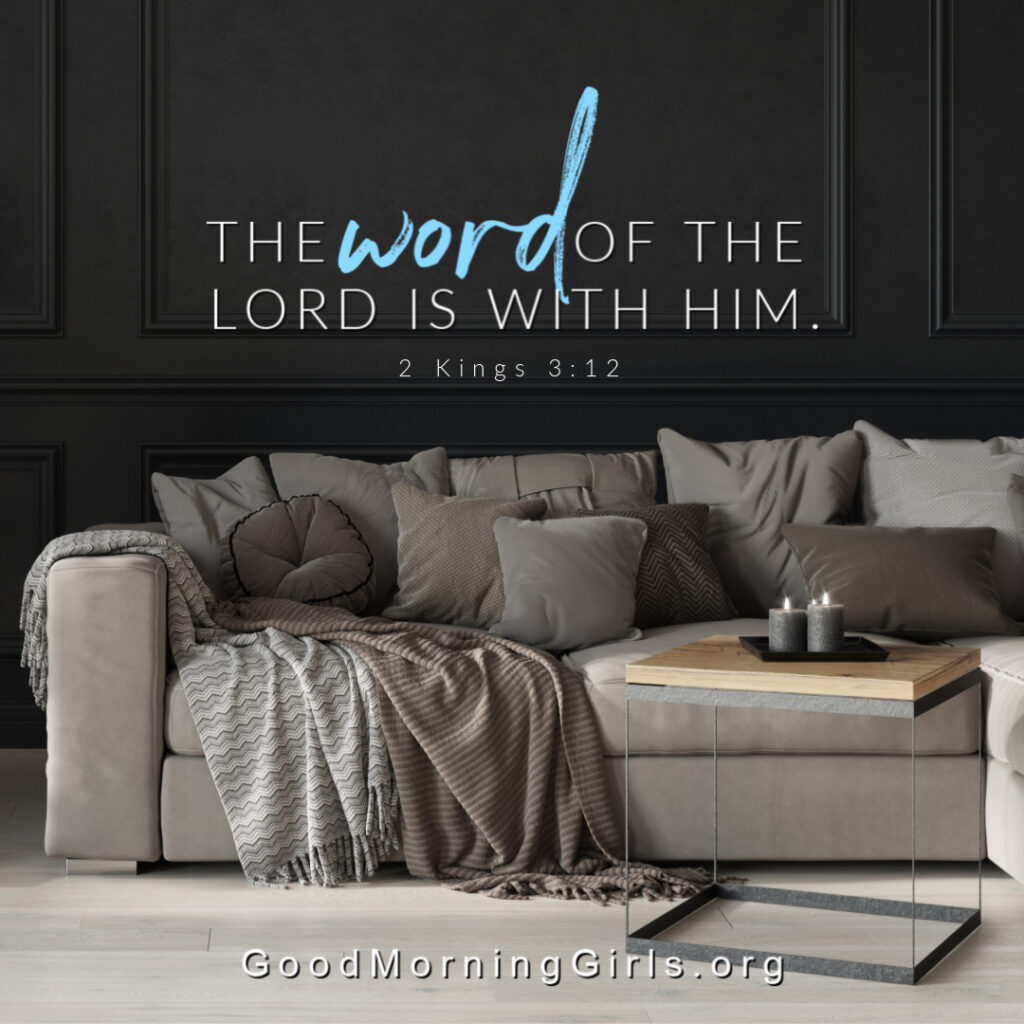 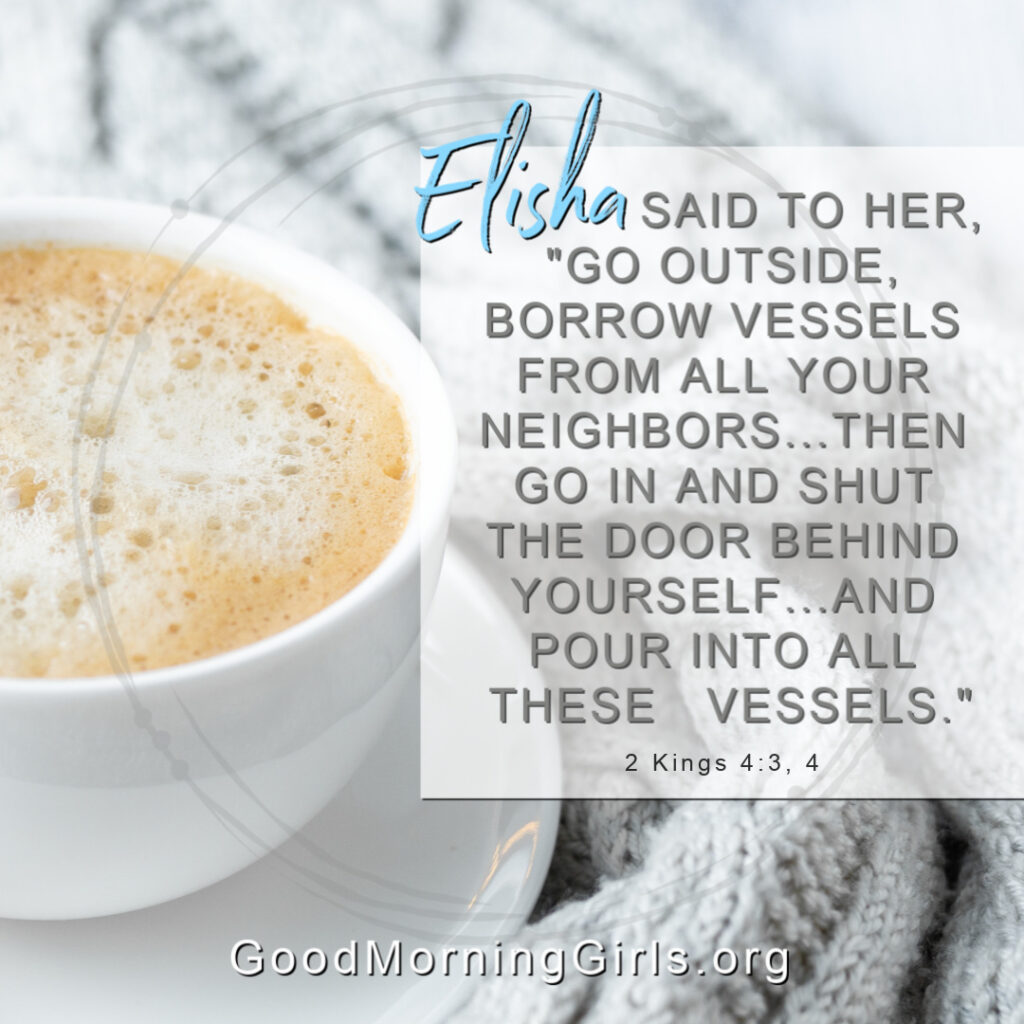 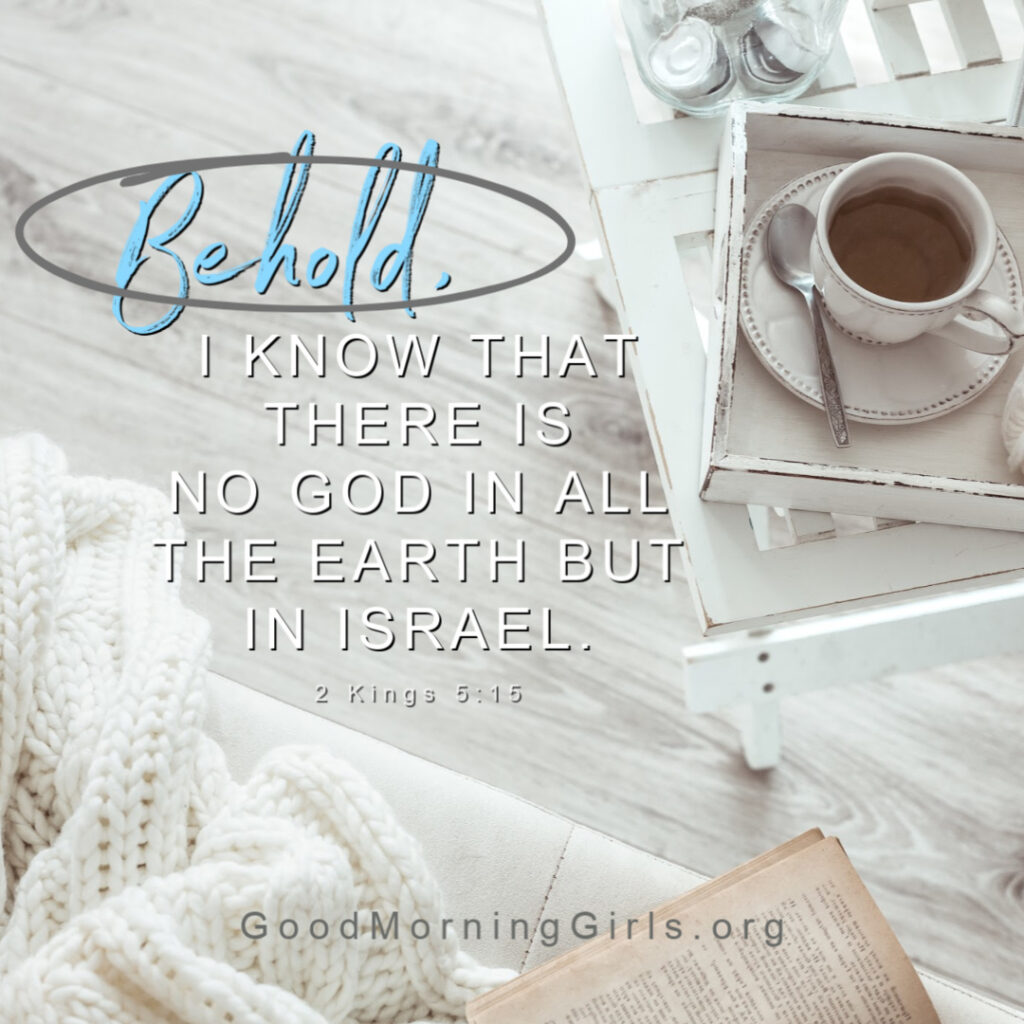 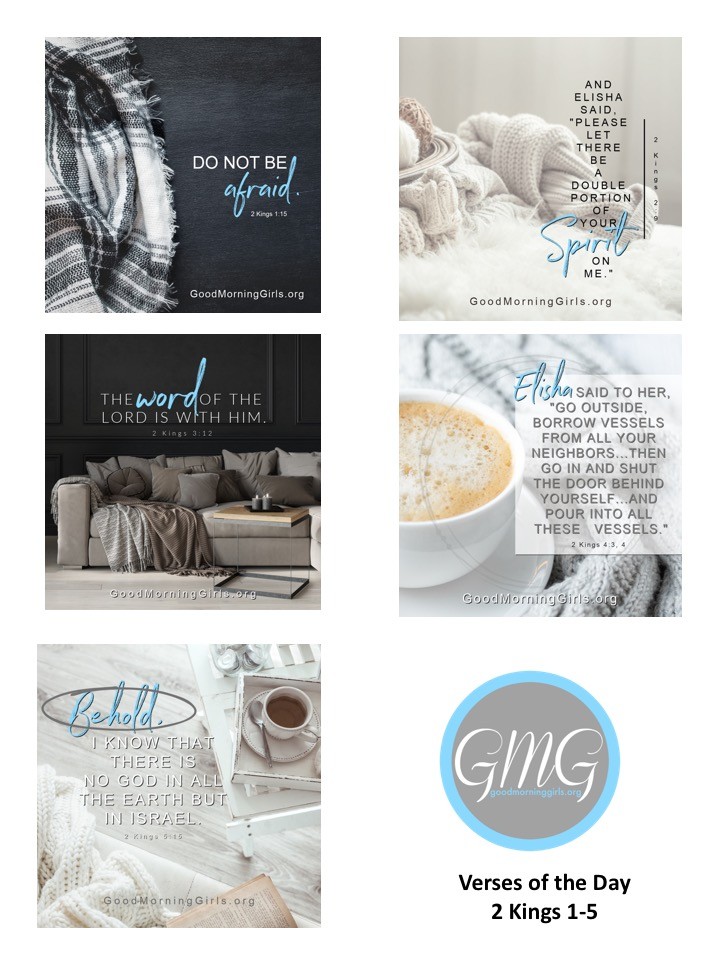 Click HERE to print the Verses of the Day for 2 Kings 1-5.

Here’s the Printable
Bible Reading Plan Bookmark
so you can check off the days as you go.

Here’s an explanation of the SOAK Bible Study Method and Bible Coloring Chart if you need more guidance:

Here is the SOAK method I refer to in the video:

And the Bible Coloring  Bookmark:

Here are the highlighters, pens and pencils I refer to in the video:

Join us EVERY weekday morning ANYTIME after 7:00amEST on Facebook
to discuss the day’s reading assignment. 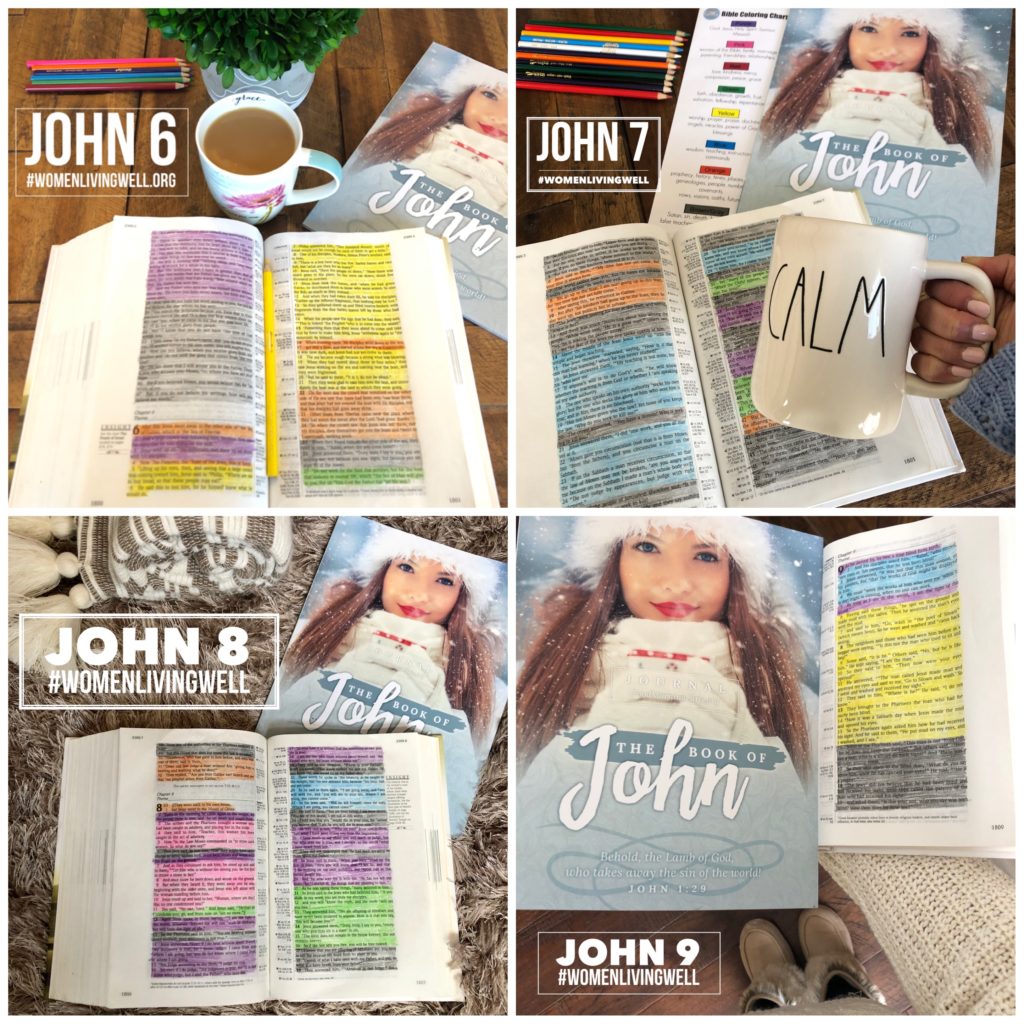 I can’t wait to see how God reveals himself personally to each of us, as we read the book of 2 Kings together.  Some of the chapters are quite long, so be sure to leave at least 20 minutes for your reading each day.

I am in prayer for you all and asking God to help us understand his word clearly.

Have a wonderful week in God’s Word – I’ll see you back here on the blog this Friday with a video just for you!  (Don’t forget to visit our community out on Facebook and Instagram daily.)

Keep walking with the King,

It’s not too late! If you’d like to purchase the
Companion Journal to our 2 Kings Bible Study
It’s Available on Amazon.

Do you have a guy in your life
who wants to study the book of 2 Kings with you?
Here’s a journal for him too!!
(the interior is identical to the Girls Journal)
It’s available now on Amazon too. 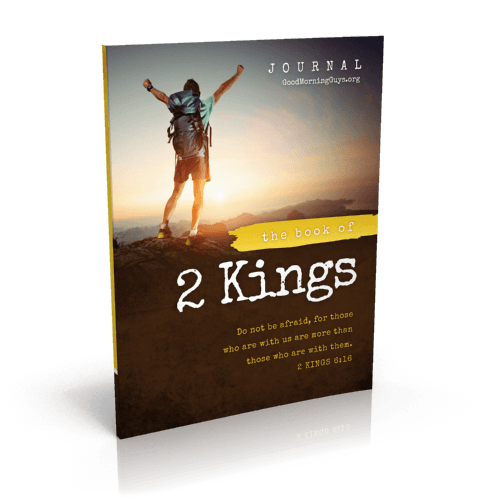