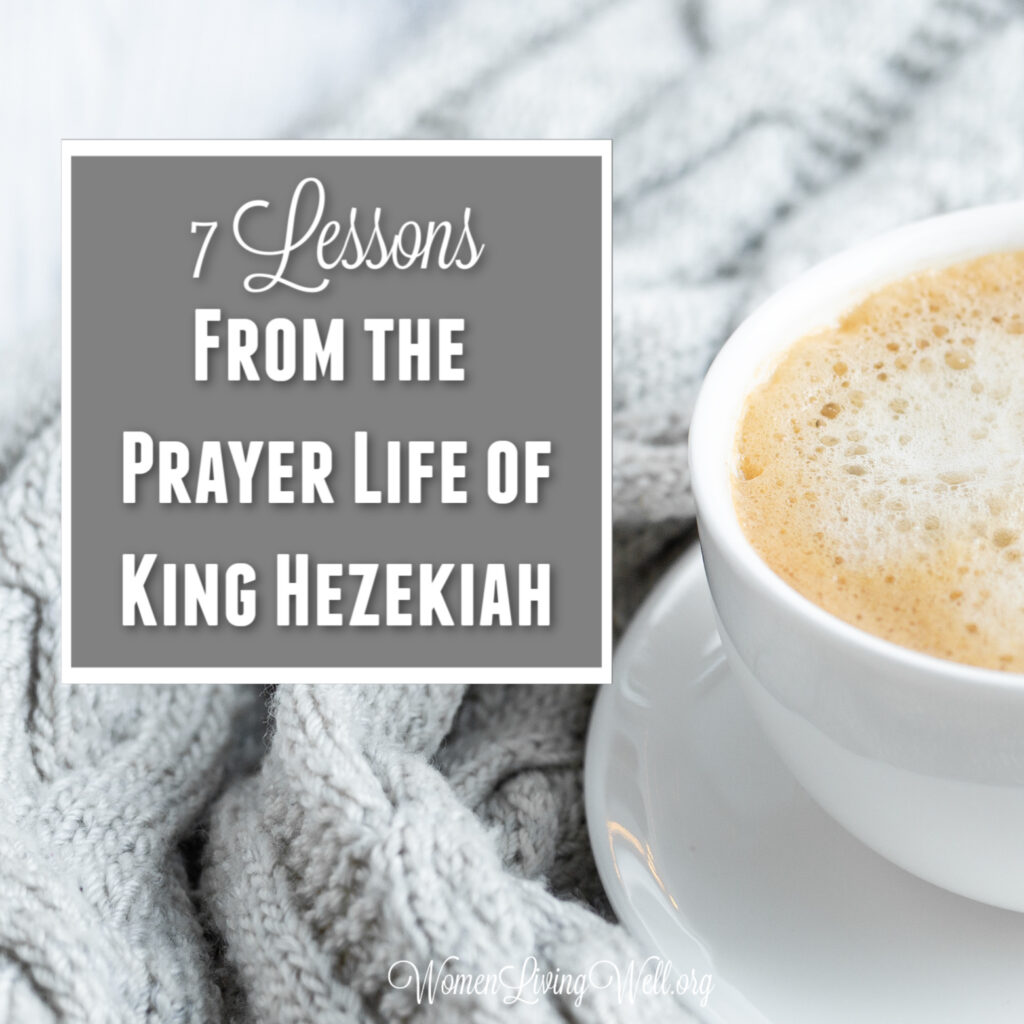 If we are not careful, fear can become more than just a passing emotion. It can grip our lives and take control of our thoughts and cause us to not trust God.

The enemy likes to use the same tactics over and over to knock us down.  Today we’ll look at a man who was in deep distress and how he combatted his fears with prayer.

Prayer is something we will never master.  We continually need to be reminded to bring every detail to the Lord, so he can calm our hearts down, reveal his will and be glorified as he works in our lives.

In 2 Kings 19, we finally see a godly king rise up in Judah!  Besides King David, King Hezekiah was the most righteous king of Judah.  But just because he lived an upright life, did not mean his life was easy – it was quite the contrary. Instead, he was the target of an attack by the King of Assyria.  Assyria was a much more powerful nation but it was Hezekiah’s prayer life that saved them from their enemies.

So let’s take a closer look at how this man prayed and learn from him.

7 Lessons from the Prayer Life of Hezekiah

In 2 Kings 18, threats from the King of Assyria came to the people of Judah and they were in such distress that it says the women were at the point of birth but had no strength to actually deliver their babies (2 Kings 19:3). The king’s threats literally scared the women to death!  Can you imagine?

Look at the first thing King Hezekiah did when he heard the threats from the King of Assyria:

As soon as King Hezekiah heard it, he tore his clothes and covered himself with sackcloth and went into the house of the Lord. (2 Kings 19:1)

Lesson 1:  When crisis hits, Hezekiah immediately goes to the house of the Lord.

Friends, where do you go when a crisis hits? Are you found in the house of the Lord?

Then God sent the prophet Isaiah to Hezekiah to tell him to not be afraid and assure him that God will save them.

Isaiah said to them, “Say to your master, ‘Thus says the Lord: Do not be afraid because of the words that you have heard, with which the servants of the king of Assyria have reviled me.  Behold, I will put a spirit in him, so that he shall hear a rumor and return to his own land, and I will make him fall by the sword in his own land.’ (2 Kings 19:6,7)

Lesson 2: Hezekiah needed a gentle reminder from God, to not be afraid.

If something is troubling you today, let this be a gentle reminder to you – do not be afraid.  God is with you and he will help you.

Then the King of Assyria continued to play on Hezekiah’s fears by sending a threatening letter to him, but Hezekiah knew just what to do with that letter.  Look what he did:

Hezekiah received the letter from the hand of the messengers and read it; and Hezekiah went up to the house of the Lord and spread it before the Lord.(2 Kings 19:14)

Lesson 3: Hezekiah knew his only hope was God.  He went straight to the house of the Lord and spread the letter out before the Lord.

Often times we spread our problems out before trusted friends, a pastor or a counselor. This is wise but we must not neglect going FIRST to the Lord in prayer and spreading out all the details before him!

Then look at how Hezekiah approached God’s throne in prayer:

And Hezekiah prayed before the Lord and said: “O Lord, the God of Israel, enthroned above the cherubim, you are the God, you alone, of all the kingdoms of the earth; you have made heaven and earth. (2 Kings 19:15)

Lesson 4:  Hezekiah did not go flippantly to the Lord in prayer.  He saw God as He is, enthroned above the cherubim, as the one and only, King of heaven and earth.

When you pray, do you ever imagine God in heaven, on his throne?  Try addressing God the way Hezekiah did when you pray and see how different the prayer feels.  Picture God in all his power and majesty and let the one true God drive out the fear that the enemy is tempting you to feel.

Then Hezekiah told God about the enemy and what he had done.

Incline your ear, O Lord, and hear; open your eyes, O Lord, and see; and hear the words of Sennacherib, which he has sent to mock the living God. Truly, O Lord, the kings of Assyria have laid waste the nations and their lands and have cast their gods into the fire, for they were not gods, but the work of men’s hands, wood and stone. Therefore they were destroyed. (2 Kings 16-18)

Lesson 5: Hezekiah did not just want God to hear his own words, but he wanted God to hear the words of his enemy too.

When we pray, we can tell God everything – the entire story of what is happening.  God already sees all but there is power in us laying it out before God.  As we pray, God gives us clarity and discernment to handle the situation.

And then Hezekiah gave his plea:

Lesson 6:  Hezekiah asks God to save them, not for his own glory but for God’s glory.

It is so easy to get caught up in just giving God an itemized list of our prayer requests but we see that Hezekiah didn’t just make a plea for help.  His ultimate goal was that everyone would see the hand of God at work and that God would be glorified.  This needs to be the heart behind all of our prayers as well.

And then God answered Hezekiah’s prayer:

34 For I will defend this city to save it, for my own sake and for the sake of my servant David.”

35 And that night the angel of the Lord went out and struck down 185,000 in the camp of the Assyrians. And when people arose early in the morning, behold, these were all dead bodies. 36 Then Sennacherib king of Assyria departed and went home and lived at Nineveh. 37 And as he was worshiping in the house of Nisroch his god, Adrammelech and Sharezer, his sons, struck him down with the sword and escaped into the land of Ararat. And Esarhaddon his son reigned in his place. (2 Kings 19:34-37)

Lesson 7:  God took away Hezekiah’s fears by removing the enemy.

What an amazing answer to prayer!  God struck down 185,000 Assyrians in the night.

Our God is above all other Gods.

And this is the God we pray to too!

Friends, if something is troubling you today, remember to not give way to the enemy’s tactic of fear.  Instead, go to the Lord in prayer.  Imagine God on his throne, as he truly is. Let God remove all of your fear as you lay all the details out before Him. Seek God’s glory in the situation and wait on the Lord.

Trust that God will work things out for your good and his glory.

If you’d like to purchase the companion journal to 2 Kings
it’s still Available on Amazon.