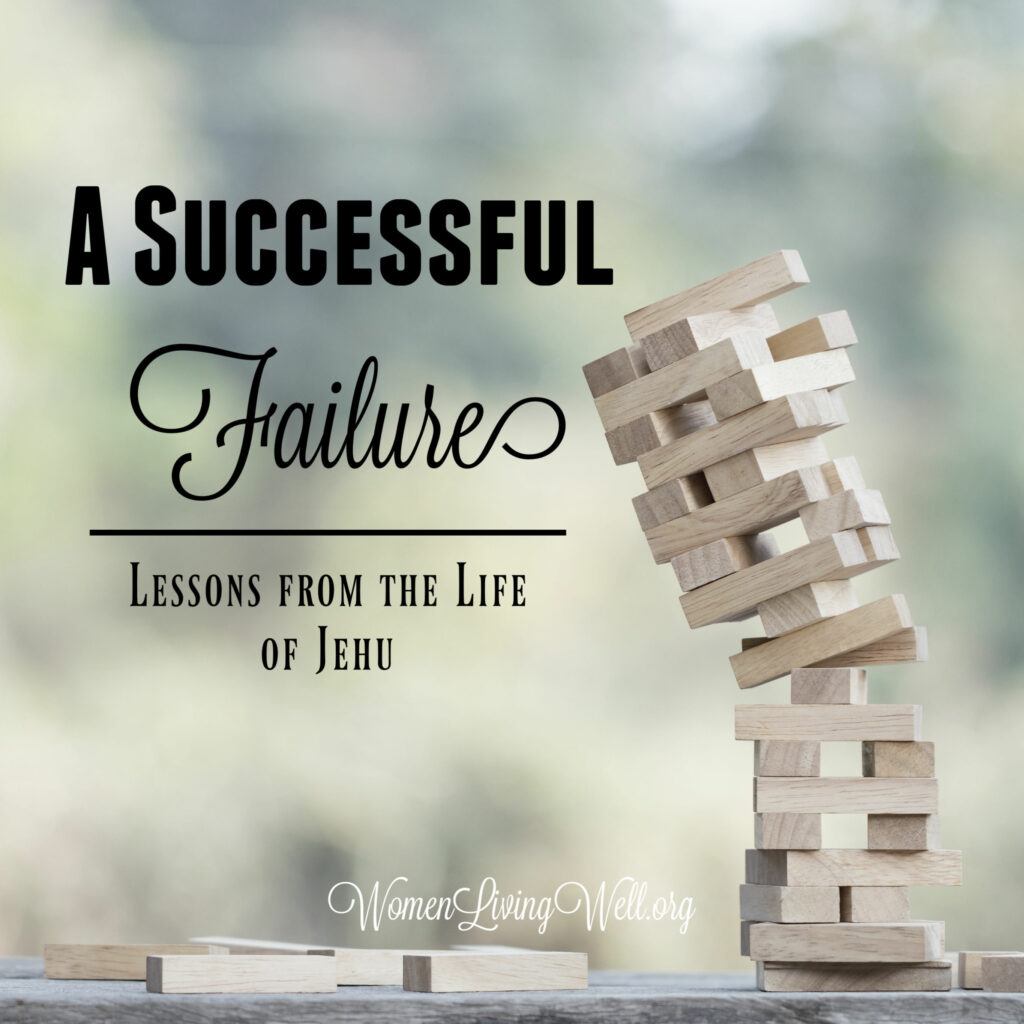 Today’s story is not your average Sunday School story.  Since the Bible is nearly 2,000 pages long, there are many stories that rarely get read or taught in church.  The battles of Jehu are hard to understand without understanding the historical background of 2 Kings but tucked inside this story are a few life lessons for us.

In those days, there were very few good kings.  In 1 Kings 16:30, it says of the former King, named Ahab, that he had done more evil in the sight of the Lord than all those before him.  He was a murderer and an idolater and so we see in 2 Kings 9 that God used one of Elisha’s prophets to anoint Jehu as the next King of Israel and he is given an assignment — “strike down the house of Ahab”.

And the young man poured the oil on his head, saying to him, “Thus says the Lord, the God of Israel, I anoint you king over the people of the Lord, over Israel. 7 And you shall strike down the house of Ahab your master, so that I may avenge on Jezebel the blood of my servants the prophets, and the blood of all the servants of the Lord. 8 For the whole house of Ahab shall perish, and I will cut off from Ahab every male, bond or free, in Israel. 9 And I will make the house of Ahab like the house of Jeroboam the son of Nebat, and like the house of Baasha the son of Ahijah. 10 And the dogs shall eat Jezebel in the territory of Jezreel, and none shall bury her.” Then he opened the door and fled.
(2 Kings 9:6-10)

Jehu Is Used by God to Bring Judgement

Jehu had a hard calling.  He was called by God to bring judgement on the house of Ahab.  So, in 2 Kings 9:20, we see perhaps why God chose Jehu…He is a very intense man.  Look at how he rides his horse as he carries out the commands of God.

The watchman reported…”The driving is like the driving of Jehu the son of Nimshi, for he drives furiously.”
(2 Kings 9:20)

Jehu “drives furiously” towards the battle as he obeys what God has told him to do and in verse 24, he draws his bow with his “full strength” and pierces the heart of the son of King Ahab, named Joram.  Then he continues on and pursues King Ahaziah and shoots him as well.

So in one day, two kings are killed. But Jehu is not finished, he completes his mission by having King Ahab’s wife, named Jezebel, put to death as well.

At the end of 2 Kings 9, we see that God has used Jehu to fulfill the words of the prophet.

A Twist in the Story

At this point, Jehu seems to appear to be obedient to the Lord. We see at the start of chapter 10, Jehu put to death 70 sons of Ahab, again, fulfilling the judgement and word of the Lord.

Then he set out and went to Samaria. On the way, when he was at Beth-eked of the Shepherds, 13 Jehu met the relatives of Ahaziah king of Judah, and he said, “Who are you?” And they answered, “We are the relatives of Ahaziah, and we came down to visit the royal princes and the sons of the queen mother.” 14 He said, “Take them alive.” And they took them alive and slaughtered them at the pit of Beth-eked, forty-two persons, and he spared none of them.

Jehu’s zeal to follow God’s call on his life went too far when he slaughtered the house of King Ahaziah.

Jehu’s Pride and Desire for Glory

One thing you’ll see, as you look at the life of Jehu, is that he does not have a real and personal relationship with God.  Jehu obeyed God with zeal, energy and enthusiasm as much as it personally benefitted him.

And so, the downfall of Jehu began when his pride and desire for personal glory entered in.  Jehu went to a highly respected and godly man named Jehonadab and he said this:

“Come with me, and see my zeal for the Lord.” So he had him ride in his chariot. And when he came to Samaria, he struck down all who remained to Ahab in Samaria, till he had wiped them out.”
2 Kings 10:16,17

Jehu was proud of his zeal and he desired glory for his accomplishments, so he continued to show off to Johonadab by striking down the followers or Baal and burning down the house of Baal.

23 Then Jehu went into the house of Baal with Jehonadab the son of Rechab, and he said to the worshipers of Baal, “Search, and see that there is no servant of the Lord here among you, but only the worshipers of Baal.” 24 Then they went in to offer sacrifices and burnt offerings.  Now Jehu had stationed eighty men outside…as soon as he had made an end of offering the burnt offering, Jehu said to the guard and to the officers, “Go in and strike them down; let not a man escape.”… and they brought out the pillar that was in the house of Baal and burned it. 27 And they demolished the pillar of Baal, and demolished the house of Baal…

This man does nothing small.  He is big and grand and…successful!

But…look at what verse 29 says…

But Jehu did not turn aside from the sins of Jeroboam the son of Nebat, which he made Israel to sin—that is, the golden calves that were in Bethel and in Dan.

But Jehu had sin in his life.  Jehu did not follow God with all of his heart.  He was not a true worshipper of God.  He got rid of what was clearly evil and that which would bring him respect but he refused to remove the idolatry in his own land, which showed he did not have true fellowship with the God of Israel.

The Consequence of Jehu Being a Successful Failure

God was not please with Jehu because he was not careful to walk in the law of the Lord with all of his heart.

But Jehu was not careful to walk in the law of the Lord, the God of Israel, with all his heart. He did not turn from the sins of Jeroboam, which he made Israel to sin.  In those days the Lord began to cut off parts of Israel. Hazael defeated them throughout the territory of Israel.
(2 Kings 10:30-31)

And so it begins.

God begins to cut off parts of Israel because of their unfaithfulness and disobedience to him.

The Road to Exile

Israel is now on the road to exile and by the time the book of 2 Kings ends, they will have been taken into captivity. And it all began right here by Jehu in 2 Kings 10.

Some commentaries call Jehu a great patriot for Israel.  As king, he was a military success and he was zealous to cleanse the land, but he did not seek to know the heart of God and to fellowship with him.

Oh, what great potential was lost because he was not a true worshiper of God!

Jehu was such a strong leader he could have turned the nation of Israel back to God.

But instead – Jehu was a successful failure.

For 600 years God had been protecting Israel from their surrounding enemies but now, things are about to change as God allows their enemies to overcome them because of their unfaithfulness to him.

8 Lessons from the Life of Jehu

1.) Worldly success can tempt us to be prideful and seek self glorification rather than God’s glory.

2.)  It is possible to be used by God but not have an authentic relationship with God.

3.) We must be careful to not pursue more intensely our goals or hobbies than we pursue following God.

4.) How we worship God matters.  False worship of a true God is unacceptable to the Lord.

5.) We mustn’t only follow the commands of God that benefit us but rather follow all that the Lord commands.

6.) A life of fellowship with God is vital to ending well.

7.) We must be on guard when God is using us and blessing us. We must stay close in our relationship to God.

8.) We need to guard against idols in our lives and worship God in truth.

And the final lesson:

If you’d like to purchase the companion journal to 2 Kings
it’s available on Amazon.