For my daughter’s fourth birthday I threw a “Princess Party”. She chose a Cinderella dress to wear and so that became our theme. On our invitations, we invited all her little friends to the “Royal Ball” in our home and requested them to wear their “Royal Attire”. 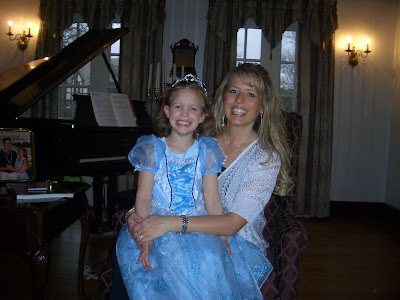 As the little girls arrived they were handed a dust rag and told to head into our living room to begin cleaning as Cinderella did. They all cooperated with smiles and made my living room shine 🙂 When all the little girls had arrived a “Royal Announcement” was made by my sister – “Hear ye, Hear ye, all the ladies of the land are invited to the palace for dinner and a ball – please line up at the door for dinner.” 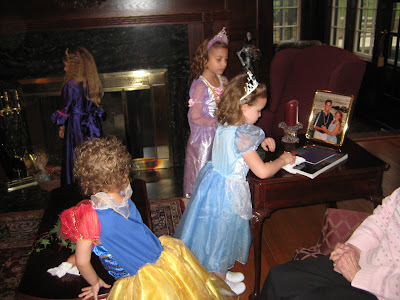 I was the fairy Godmother and as the little girls entered the dining room, I waved a magic wand around them saying “bippity boppity boo” and told them how lovely their dress was for the royal dinner. Each little princess found a seat at the dining room table for some finger food and to apply some jewels to a foam crown as a craft. Then it was time to head to the ball!!! 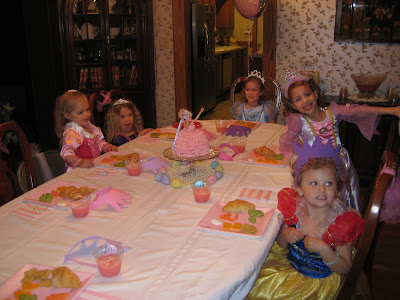 The little princesses went back to the living room and lined up on the couch and as princess music began to play – in came our prince charming! My sister’s 7 year old son… my son was going to play a prince also, but he became too bashful when time came, so I released him from his princely duties! 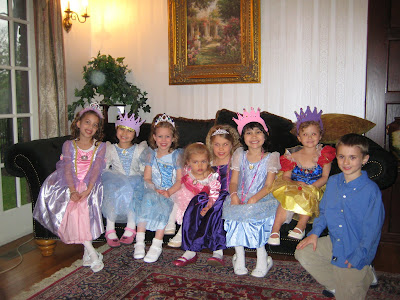 As the music played each little princess had a turn to dance with the prince. Then it happened! Our grandfather clock began to strike midnight – bong bong bong – I told all the little girls to drop one shoe and run back into the dining room for cake!! They giggled with glee and ran. 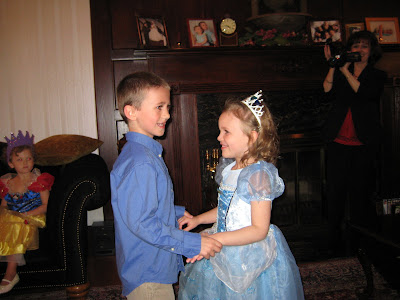 After eating the princess cake (you can find the recipe here) 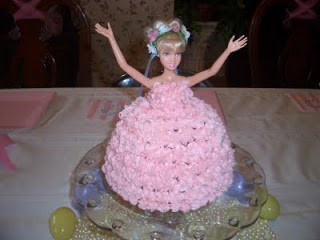 my sister went around with each little princess’s shoe and fitted it on the correct princess and that was our “Royal Ending” to our “Royal Birthday” and my daughter truly had a “Royal BALL”!!!!

What is it that makes a little girl want so badly to be a princess? Children want to be a part of a royal kingdom (my son also enjoys being a prince!). If you are a child of God – you are a daughter of the one true King – you are a princess – and you do belong to a royal kingdom. We know that this world cannot be all that there is. Ecclesiastes 3:11 says “God has set eternity in the hearts of men.” And Mark 10 tells us there is a kingdom – and we all long for that place deep in our hearts.

This world is like Cinderella’s ball – the greatest day or joy eventually comes to an end. The clock strikes midnight and we fall on hard times. All joys we have here are just a taste of what is coming in heaven. And one day when we enter the kingdom of heaven we will never have to step foot back on planet earth where the clock can strike midnight again. Forever we will be with the King of Kings and there we will live in joy for eternity! What a great hope we have!

Revelation 19 tells us that one day our Prince will come riding on a white horse to take us with him. “I saw heaven standing open and there before me was a white horse, whose rider is called Faithful and True…His eyes are like blazing fire and on his head are many crowns…He is dressed in a robe dipped in blood, and his name is the Word of God…On his robe and on his thigh he has the name written: King of Kings and Lord of Lords.”

Princesses – Your prince will come for you! If this world has dealt you a royally bad hand – hang on – it won’t be long now till you stand face to face with the King of Kings! Take hope and courage from that – and have courage today to live life with defiant joy! He is worthy!