Welcome to the very first post in our “Blogging Through the Bible” series here at Good Morning Girls! We are SOOOO excited you are here and joining us on this journey!

As we read through the book of Esther, we notice the name of God is nowhere to be found…but the fingerprints of God are everywhere!

Everything seems out of control.

The King is drunk when he requests Queen Vashti to come to his royal court.

Queen Vashti refuses and is removed as queen.

Mordecai discovers a plot to assassinate the king and the king is saved…but Mordecai is not rewarded although his name is recorded in the royal records.

Haman plots to annihilate the Jews.  A letter is sent out in all the kingdom to destroy the Jews.

Esther has not been with her groom, the king, in 30 days and going to him could mean death!

And then it happens…the people pray.

The king can’t sleep so the royal records are opened and there the king discovers his need to honor Mordecai for saving his life.

Esther gathers the courage to speak.

God is the Hero!

And all God’s people said?

The enemy has been defeated!

Things are not out of control. God is in control.

The star of this story is Esther, whose name actually means “star”.  Esther shined in a dark culture and God used her in a place where no one else could be used.  God raised her up for “such a time as this!”  He displayed his power through her.

And God has raised each one of us up, so he can display his power through us.

“That you may be blameless and innocent, children of God without blemish in the midst of a crooked and twisted generation, among whom you shine as lights in the world.” Philippians 2:15

Are you piercing the darkness with the light of God?

Some will be repulsed as you shine. Like the brightness of the sun when we come out of a movie theater, many will turn away from the light because it is simply so bright it hurts.

But some…some will be drawn to it. Like when the electricity goes out at night and we rummage through the drawer looking for a flashlight or matches, some are rummaging around looking for a light to show them the way.

There’s a spiritual battle raging for the salvation of souls around us.  Things are not out of control. God has masterfully orchestrated your life for his sovereign purposes.

But Satan hates God’s people – he wants to see them destroyed. He is unhappy you have committed to reading through the Bible cover to cover and he will do anything to cause chaos and thwart your efforts.  He will try to snuff out your light.

Oh friends, not too long ago, my light was flickering…. The enemy had me in a choke hold – mentally and emotionally. I was struggling from the pain of wounded relationships.  I could not sleep at night as my mind raced with confusion.

But then God stepped in. He brought loving friends to encourage me. He used the prayers of His people to strengthen me. He delivered me from my fears and brought helpers to my aid.

And then it was time…

Faith.  A tiny mustard seed of faith is all it takes. 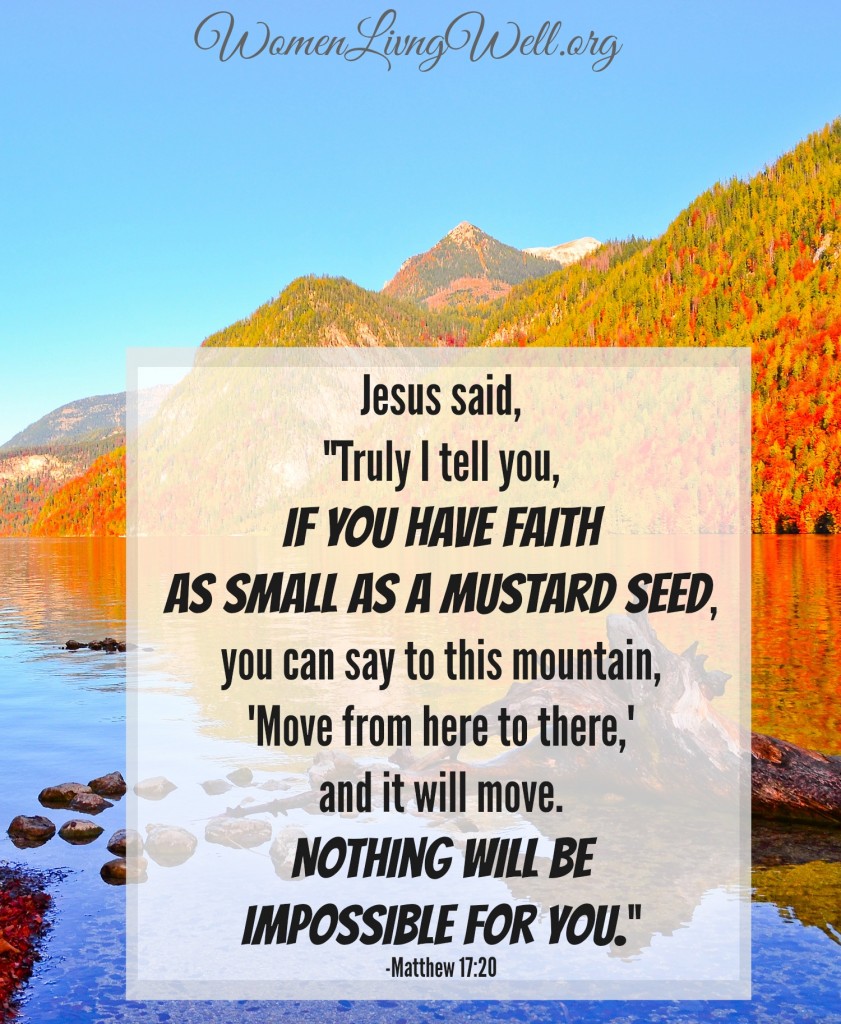 Time and again, as I think through the past of my life, I’m reminded of times God drew me out – to stand alone and depend on nothing but Him – and time and again – God revealed himself as the Hero.

This song sung by Mandisa is all about Esther and standing apart from the crowd – be encouraged as you listen:

Not the hollywood kind – the Jesus kind.

Let God be the hero as he works his sovereign plan through you.

What have you learned so far, in your reading this week, in the book of Esther?

How have you seen God’s fingerprints in your life?

**Looking for the GMG resources for this month? –> click here.

***If you are a blogger blogging through the Bible with us – come link up your post on Friday!