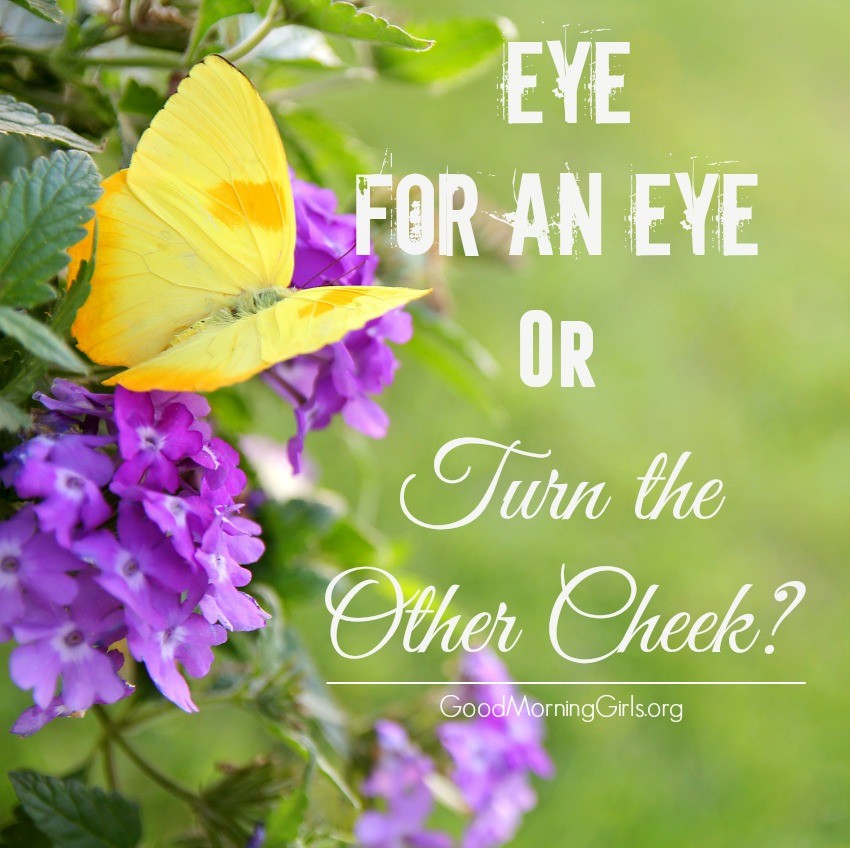 “An eye for an eye and a tooth for a tooth”

Let’s look at this phrase in its context.

If anyone injures his neighbor, as he has done it shall be done to him, fracture for fracture, eye for eye, tooth for tooth; whatever injury he has given a person shall be given to him.

Whoever kills an animal shall make it good, and whoever kills a person shall be put to death. You shall have the same rule for the sojourner and for the native, for I am the Lord your God.”

Imagine a culture with no police or judges…and a neighbor knocks your kid’s tooth out.

In an act of a vengeance, you may request a penalty too severe for the crime. So, God set up a system to protect the Israelites from too severe or too minor of consequences.  The punishment was to fit the crime…an eye for an eye, a tooth for a tooth.

This law was not meant to be seen as an act of vengeance but rather it was to check vengeance.  It was to restrain man from being out of control and in anger – giving too severe of punishment.

Now we come to the New Testament and find Jesus quoting from Leviticus 24 in Matthew 5:38-42.  Jesus says:

“You have heard that it was said, ‘An eye for an eye and a tooth for a tooth.’ But I say to you, Do not resist the one who is evil. But if anyone slaps you on the right cheek, turn to him the other also.  And if anyone would sue you and take your tunic, let him have your cloak as well. And if anyone forces you to go one mile, go with him two miles. Give to the one who begs from you, and do not refuse the one who would borrow from you.

OH my – this was revolutionary!  And to the teachers of the law, highly offensive.

Please note that Jesus does not reference the life for a life law.  He does not remove capital punishment but rather he focuses on insults and offenses such as a slap on the cheek, a law suit, going an extra mile, and one who asks for money.

Jesus is not referring to what the government or a judge should do but rather how a disciple of Christ should respond when she is offended.

You may wonder, who would sue for a tunic or robe but we see in Exodus 22:25-27, robes were used as a sort of down payment for a loan.  And what is meant by being forced to go an extra mile?  Under Roman Law the soldiers could force individuals to carry heavy loads for them.  The Jewish people despised this practice. So Jesus was saying rather than refusing or complaining, be willing to carry their backpack an extra mile.

Jesus gives various examples, so we can see the principle of refraining from retaliation and actually returning a blessing!

We are meant to be peacemakers.

“Blessed are the peacemakers, for they shall be called sons of God.”
Matthew 5:9

Oh friends, I know how tempting retaliation can be.

We’ve all been there…

-a car cuts us off on the highway and we are ready to race ahead and cut them off.

-a person insults us with their words and we are tempted to return an insult.

-a person steals from us and we are tempted to sue.

-a person lies about us and we are tempted to retaliate.

-a boss is overly demanding and puts a heavy workload on us and we are tempted to refuse.

-a person borrows money from us and never repays and we are tempted to demand a hefty repayment.

I have to admit, somedays, being a Christian is really really hard.  Choosing to be kind in the face of evil is not a walk in the park. It takes the supernatural power of God to return an insult with a blessing or to forgive someone who has clearly wronged you.

As Jesus hung nailed to the cross He said:

Forgiveness…it can be so very very hard.  I know.  We want to fight for justice, for truth to win, for consequences to fit the crime and wrongs to be righted.

Do not repay anyone evil for evil. Be careful to do what is right in the eyes of everyone. If it is possible, as far as it depends on you, live at peace with everyone. Do not take revenge, my dear friends, but leave room for God’s wrath, for it is written: “It is mine to avenge; I will repay,” says the Lord.

On the contrary:  “If your enemy is hungry, feed him;
if he is thirsty, give him something to drink.
In doing this, you will heap burning coals on his head.”

Do not be overcome by evil, but overcome evil with good.

Live at peace with everyone.

Do not take revenge.

May we follow in the footsteps of our Savior and forgive those who have wronged us.

Have you been in a situation this week where you had to make a choice – to retaliate or turn the other cheek?

Why is this such a hard teaching?

Here are some other resources that might encourage you:

How to Deal With Wounding In the Church – Part 1

How to Deal With Wounding In the Church – Part 2

Does forgiveness mean you have to have a relationship with them?

Releasing the Pain that Another Has Caused You