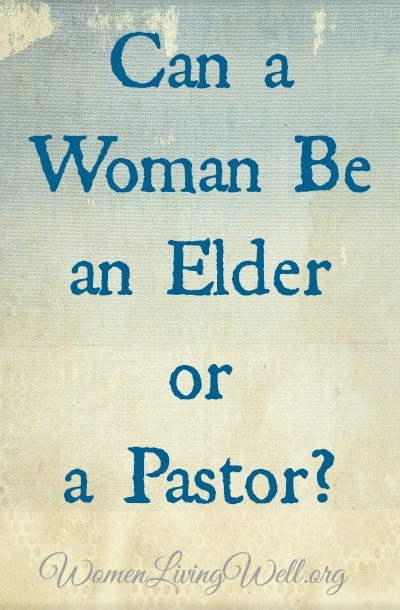 Recently a dear friend told me she doesn’t read a lot of books – she simply reads her Bible.  She doesn’t feel the need to have a lot of pastors, authors and {ahem} bloggers telling her about what scripture says or how to apply it, but rather she simply reads and obeys it.

To an avid reader and listener of on-line sermons like me, the simplicity of her walk with God is endearing.

And so today – I would like to take her approach when trying to answer this controversial question:

Can a Woman Be an Elder or a Pastor?

2 Timothy 3:16 says: All Scripture is breathed out by God and profitable for teaching, for reproof, for correction, and for training in righteousness. (esv)

Scripture is sufficient to answer this question. There’s no need for me to make a video explaining it, quote a theologian or write a detailed blog post – we simply need to look at God’s word together and together we will find our answers.

So for the next 3 Mondays, we will be looking at the book of Titus and I’ll simply point out a few of my observations and allow you to interact with God’s word as well.

Let’s get started.  {I am using the English Standard Version.  If you prefer another version – feel free to open up your Bible and read it for yourself.}

1 Paul, a servant of God and an apostle of Jesus Christ, for the sake of the faith of God’s elect and their knowledge of the truth, which accords with godliness, 2 in hope of eternal life, which God, who never lies, promised before the ages began 3 and at the proper time manifested in his word through the preaching with which I have been entrusted by the command of God our Savior;  4 To Titus, my true child in a common faith: Grace and peace from God the Father and Christ Jesus our Savior.

According to verse 1, what was the purpose of Paul writing this book?

5 This is why I left you in Crete, so that you might put what remained into order, and appoint elders in every town as I directed you— 6 if anyone is above reproach, the husband of one wife, and his children are believers and not open to the charge of debauchery or insubordination. 7 For an overseer, as God’s steward, must be above reproach. He must notbe arrogant or quick-tempered or a drunkard or violent or greedy for gain, 8 but hospitable, a lover of good, self-controlled, upright, holy, and disciplined. 9 He must hold firm to the trustworthy word as taught, so that he may be able to give instruction in sound doctrine and also to rebuke those who contradict it.

According to Titus1:5-9, what are the qualifications for an Elder or a Pastor?

Can a woman meet all of these qualifications?

10 For there are many who are insubordinate, empty talkers and deceivers, especially those of the circumcision party. 11 They must be silenced, since they are upsetting whole families by teaching for shameful gain what they ought not to teach. 12 One of the Cretans, a prophet of their own, said, “Cretans are always liars, evil beasts, lazy gluttons.” 13 This testimony is true. Therefore rebuke them sharply, that they may be sound in the faith, 14 not devoting themselves to Jewish myths and the commands of people who turn away from the truth. 15 To the pure, all things are pure, but to the defiled and unbelieving, nothing is pure; but both their minds and their consciences are defiled. 16 They profess to know God, but they deny him by their works. They are detestable, disobedient, unfit for any good work.

According to verses 11 and 13, what should the leaders of the church do with insubordinate teachers?

According to verse 11, what was the motivation for their teaching?

According to Titus 1:16, do all teachers in the church truly know God?

Paul talks about false teachers, sound doctrine and “good works” in every chapter of Titus.  He also includes instruction on the roles of women in the church, in the home, and the gospel.  We cannot separate the gospel from sound doctrine and right living.  And we cannot live rightly without taking God at his word.

Let’s shut out the noise of the culture and tune in –to the higher ways of our creator. 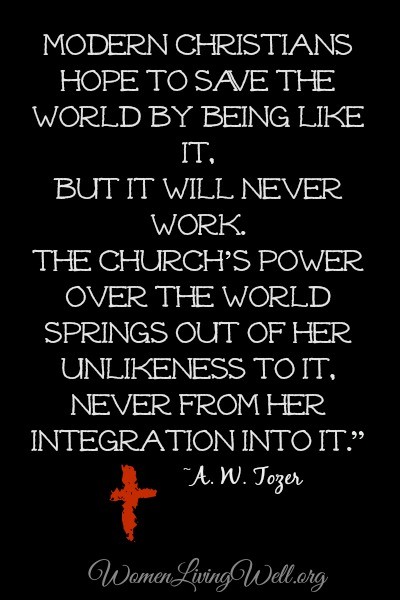 Secondly, some are saying that I am a pastor.   I am not ordained and  I do not hold the office of pastor or elder of a local body of believers.  I attend a wonderful local church that has a group of elders and pastors who all meet the above qualifications.  I am a writer/author/speaker, here to serve and encourage other women.

Thirdly, women are smart, capable and able to spread the word of God.   Use your gifts to the glory of God.  God gives us guidelines – may we seek to understand and embrace them…even the difficult ones.  God Bless.

The other posts in this series:
Speaking the Truth In Love
The Authority of Scripture and 5 Ways to Defend Truth
The Ultimate Cultural Sin –Intolerance
How to Respond to the Labels – Intolerant, Judgmental, and Hater
What is Sound Doctrine?
Should Christians Simply Unite Around the Gospel?
Can a Woman Be an Elder or Pastor?
Should a Wife Submit To Her Husband?
Can Good Works Save You?
Wolves in Sheep’s Clothing

🍁🍂🏡. Today we begin the #MakingYourHomeAH

You are LOVED! The God of this universe loves you

🥳Just 1 day left until we begin - TOMORROW WE B